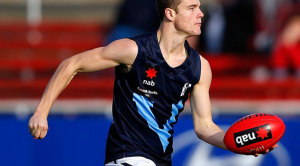 WA twice clawed back to within one straight kick of Metro in a tense final 15 minutes, before Eastern Rangers big man Michael Apeness stood tall in the forward 50 to help regain the ascendancy.

Classy Northern Knights utility Ben Lennon then iced the game with his fourth goal in the dying minutes, much to the relief of Allison and his coaching staff.

Lennon’s haul, three of which came as he stole the show with an electric display in the third quarter, were pivotal in the victory, and came after Tom Boyd (Eastern Rangers) had gone down with an ankle injury just 20 minutes into the match

The man tipped as a possible No.1 draft pick had three majors on the board in a dominant opening before landing awkwardly in a marking contest.

His absence left a gaping a whole in Metro’s forward half, an obstacle Allison said was one of many his side had to overcome during the week.

“It’s a tough road trip there is no doubt about that,” Allison said.

“They’re not excuses and they are the type of things the players have to get used to but we had a six day break with long trip to Perth thrown in.”

“We also got kicked off the ground and weren’t able to train on Thursday, and then Tom Boyd – who had kicked three and was lining up for his fourth – goes off injured and we’re down to three on the bench.

“When you add up all those things it’s a pretty good win.”

Allison said he was extremely pleased with the way his side responded under immense pressure in the final term.

“To the credit of the players they just kept defending,” he said.

“We’ve been trying to teach them to not worry so much about the scoreboard but more about the process.

“During those tense moments, despite them kicking those three in a row, our kids just kept defending and eventually it turned.

“Our guys were able to win back the momentum and that’s something that will give them a lot of confidence for the remainder of the carnival.”

Pint-sized Eastern ranges duo Mitch Honeychurch (33 disposals) and Ben Cavarra (26), and Sandringham Dragons star Josh Kelly laid 6 tackles won 6 clearances to go with 30 possessions of his own, were others to enhance their reputations in the win.

Vic Metro now turns its attention to the clash with South Australia on Friday June 28 at Simonds Stadium before facing Victoria Country on Wednesday July 3.