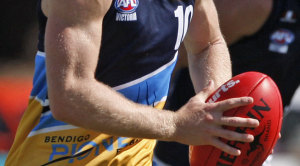 The Bendigo Pioneers notched their third win for the year on Saturday with a convincing 37-point victory over the Calder Cannons, as Darren Edmondston reports.

The Pioneers saluted 13.11 (89) to 7.10 (52) on their home turf at Queen Elizabeth Oval, kicking clear in a powerful second term and maintaining their ascendancy for the remainder of the match.

With the Cannons kicking with the aid of a strong breeze in the first quarter it only took four minutes for the visitors to register the first major through live-wire, and their leading goal kicker Josh Cauchi.

But not to be out done, Alex Hywood returned the favour just two minutes later for the Pioneers in what became an arm wrestle for the remainder of the term.

Both sides traded goals in an entertaining term and at quarter time the Cannons held a slender two-point lead.

It would be the last they would see of the lead for the afternoon.

With four goals to nil, the Pioneers controlled the second term, keeping the Cannons scoreless to take a 27 point lead into the main break.

The Pioneers’ defence was well lead by bottom-age player Danny Jones, while Harry O’Meara gave them plenty of rebound coming out of defensive 50.

Cauchi remained a threat up forward for the Cannons but his impact on the game reduced as the Pioneers seized control.

While the Cannons again found their competitiveness in the third quarter, they still allowed the Pioneers to kick two goals to one and set up a 32-point lead at the last break.

The final term began at rapid pace and with Blake O’Halloran’s second and third goal for the match, becoming the first multiple goal scorer of the match.

Fittingly, Chisari and Heavyside also hit the scoreboard in the final stanza, while two goals to Cannons forward Daniel Thompson assured the scoreboard remained respectable for the visitors.