Cannons turn pink for Women's Round 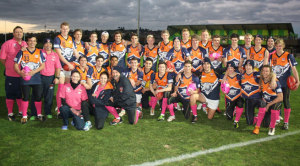 The Calder Cannons will add a touch of pink to Round 11 of the TAC Cup this weekend, adding another layer to Women’s Round.

To recognise the contribution women play at the Cannons, the clash with the Oakleigh Chargers on Sunday will involve a splash of pink.

Cannons players will don pink socks for the match, with some of their support staff wearing pink polos, while the footballs used will be, yes, you guessed, pink.

This weekend marks the AFL’s Women’s round, which aims to recognise and celebrate the role that women play in within the football industry, whether it is as fans, volunteers, players or staff.

The TAC Cup, being a development league for aspiring AFL footballers, relies heavily on the support of women through the players’ mums, sisters and also volunteers in the 12 regions, who fulfil a variety of roles from sports trainers, physios and team mangers.

Women’s roles at every level of football, on and off the field, are undoubtedly critical to the continued success and growth of the game.

Cannons football manager Meg McArthur got her start as a Myotherapist with the team before working her way up to her current position.

“The Cannons provided me with a career pathway in order to develop my skills and contribute to the club,” McArthur said.

“They have always valued the input of women in the organisation – at least half a dozen of our match day and training staff are women – and they recognise the valuable skills that women bring to the table.”