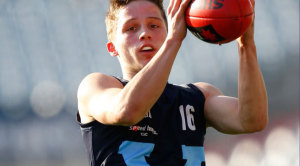 South Australia is on track to clinch the NAB AFL U18 Championships after defeating Victoria Metro today at Simonds Stadium, writes David O'Neill.

The final margin was just three points after Vic Metro forward Max Hayes (Sandringham Dragons) converted after the final siren but SA had Metro’s measure for most of the afternoon.

Classy Dragons left-footer Josh Kelly was metro’s best with 28 disposals and a last quarter goal on his non-preferred that ignited the hosts. Jack Billings (20 possessions) was also prominent playing mostly across half forward in his return from injury.

Matt Scharenberg was again pivotal with 21 touches at half back, while Luke Dunstan continued his strong carnival with 22. But it was SA’s tall forwards that were the difference with Darcy Hourigan (3 goals) and Luke Reynolds (2) both marking strongly throughout.

While neither made the most of their opportunities, both provided a target for SA’s talented midfield brigade.

Vic Metro and Vic Country will now do battle next Wednesday night at Etihad Stadium with Metro looking to finish on a positive note and Country hoping to notch its first Division 1 win for the Championships.