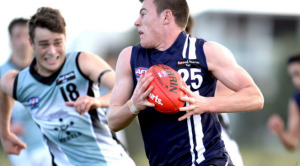 A CLINICAL Geelong Falcons remain at the top the TAC Cup ladder after disposing of North Ballarat Rebels by 69 points at Cragieburn on Sunday, writes Joel Dwyer

A Rebels side, affected by numerous forced changes at the selection table was competitive for stages, but Geelong proved far too strong over four quarters, prevailing 17.11.113 to 6.8.44.

A relatively even opening term, which saw both sides control passages of play, ended with the Falcons holding an eight-point lead at quarter time.

Geelong raced out of the blocks in the second term, booting the first four goals to take a handy 21-point lead into the long break.

The Falcons machine clicked into gear immediately after half-time, routing the Rebels in the third term, booting 8.1 to no score.

To the credit of the inexperienced Rebels, they gamely fought out the match, only losing the final quarter by one behind.

The Falcons lacked a standout player, with their dominant victory built courtesy of an even contribution from all players across the board.

Rebels coach David Loader acknowledged his side had played some of their worst football of the season, but still believed there were some positive signs from his players.

"At the end of the day we have been beaten convincing by a really good side, but there was some upside to it too," Loader said.

"A real positive was to get some games into more bottom-aged kids which they will hopefully learn from. We keep moving forward, albeit slower than what we want too."

Loader reserved special praise for a couple of players who continue to give a solid effort each week, regardless of the game situation.

"We've got two or three blokes who have been in pretty good form," Loader said.

"Sammy Bennett and Lachie Cassidy have been really solid for the last five or six weeks."

Loader was also pleased with Josh Webster, Arthur Armstrong and Ned Mabon for playing their role in the side.

North Ballarat will look to rejoin the winners list on Saturday, when they meet Eastern Ranges at Eureka Stadium at 1.00PM.