Freeman back for Vic Metro 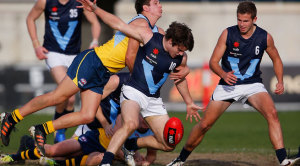 Freeman returns for the big game at Etihad Stadium after missing the narrow three-point loss to South Australia last week through injury.

It’s an important inclusion for boys in blue as they hope to finish off the NAB AFL U18 Championships in style.

Watch Freeman attack the ball or his opponent at a stoppage and it’s hard not to be a fan. His combative nature on the field and thirst for the contest has seen the 18-year-old become one of Metro’s most consistent performers in the U18 Championships.

While he may not have attracted the attention of highly-regarded teammates Josh Kelly and Luke McDonald, Freeman has been where he enjoys it the most, at the coalface

His inside grunt and tackling pressure has allowed his teammates time and space on the outside and has proved he can compete with the best midfielders his age in the country.

“I’ve been pretty happy with the transition from TAC Cup footy and school footy into this more elite level competition,” Freeman said.

“The intensity of the game and the tempo that it’s played at is probably the biggest difference and also the bigger bodies.”

“But I’ve always played my footy the same way. See ball, get ball, is how it’s always been and it’s just a matter now of adapting my game to compete against the bigger bodies.”

“I’m not daunted at all, the (U18 Championships) give you the chance to come against the best and show that you’re as good as them, if not better.”

The boy who grew up playing with the Dingley Football Club is one of several Dragons to wear the Vic Metro on the biggest stage.

“We’ve got a strong group down at Sandi. I think we had 10 or 11 guys in the initial Vic Metro squad and hopefully if we can play as team then we can get the job done.”

The big game between Vic Metro and Vic Country gets under way at 5.30pm.

Follow @TACCup for live updates from Etihad Stadium or #NABAFLU18s