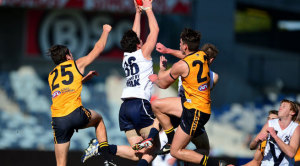 IT WAS the type performance that’s not easily forgotten.

Vic Country may have fallen agonisingly short of Western Australia in Round 4 of the NAB AFL U18 Championships, but not before Patrick McCartin had left a giant impression on the carnival, writes David O’Neill.

The Geelong Falcons bottom-ager may be too young to be drafted at season’s end but the key forward left no one in doubt last Friday of his enormous potential.

McCartin dragged down 10 marks, kicked five goals and did everything but haul Vic Country over the line.

A goal after the siren dashed the host’s chances of a Division 1 win, leaving WA and four-goal hero Dominic Sheed to walk away with the win.

Even Sheed, despite playing for the majority of the match at the other end, felt McCartin’s presence when a collision with the 17-year-old in the dying minutes left the West Australian with a broken collarbone.

McCartin's presence up forward will be a pivotal factor in tonights game when Vic Country takes on the might of Vic Metro.

It's an important match for the country boys, looking to finish the NAB AFL U18 Championships on a high.

After performing so well last week, McCartin admitted his confidence levels had risen.

“It was good to get on the end of a couple and take a few grabs in front of all my family and friends,” the boy from Geelong said.

“I’ve been working really hard on my game, trying to improve my high intensity running and repeat efforts, and that seems to helping me at the moment.

The performance, which yielded high praise for his aerial courage, was the culmination of a steady improvement throughout the U18 Championships.

After not making a significant impact in game 1, McCartin showed signs in his next two outings before exploding on the scene against WA.

“I think it was really a confidence thing. You come in as a bottom-ager and there are a lot of people in the team that are really highly regarded and it was a little intimidating.”

“But I think the more comfortable I became around the group, the more confident I became which helped me improve across the carnival.

“Just knowing that I can go out there and match it with the best guys my age is a huge confidence booster for me.”

Follow @TACCup for live updates from Etihad Stadium or #NABAFLU18s