Ranges a class above Rebels 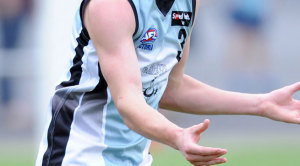 The Ranges’ win was their first game at Eureka Stadium in eight seasons, secured after a dominant opening half.

The visitors slammed on another five goals in the second term, to lead by 46 points at the half which effectively killed the game as a contest.

After a fierce spray from coach David Loader at half time, the Rebels showed more effort and intensity in the second half.

However, the Ranges still managed to outscore the struggling Rebels by 25 points in the second half, capping a dominant performance which improved their season record to 9-3.

He was ably supported by key forward Christian Petracca who snared four goals of his own.

"They provided a great lesson and an example of what hard working forwards do," Loader said.

"They worked harder and just showed our young backmen where they need to get to."

Post-match, Loader had already turned his attention to preparing for next weekend’s game, which will see the return of Matt Crouch, Dallas Willsmore and Louis Herbert from Vic Country duties.

"Those boys bring some quality with them, there's no doubt about that," Loader said.

"They also bring that little bit of experience. We are looking forward to getting those boys back."

In a largely disappointing outing for the Rebels playing group, Loader singled out Josh Webster, Lachlan Cassidy and Jesse Palmer for competing solidly over four quarters.

North Ballarat will attempt to improve their season record to 3-10 on Saturday, when they travel to Cragieburn to meet the Murray Bushrangers at 2 pm.