Dragons by a point over Ranges 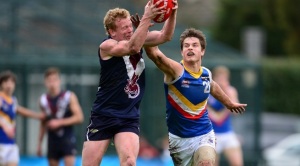 Box Hill City Oval played host on Sunday to an epic clash between the Sandringham Dragons and the Eastern Ranges, with the Dragons securing the win by one solitary point. In a hard fought and physical battle Sandringham hit the front late to record their sixth win of the season, as Alexander McLeman reports.

The opening quarter proved that the conditions would have an influence over the game, with the Dragons not making the most of their opportunities to have nine scoring shots to two, but only led by seven points at quarter time.

Sandringham were first to pounce in the second term with a goal from Max Hayes. The Ranges started to get more of the ball, but were struggling for accuracy. Sandringham were slightly the more dominant team across the term which ultimately paid off with two quick fire goals from Zachary Merrett to round off another steady quarter as the Dragons went in at half-time leading by 22 points.

The half-time break was clearly what both sides needed to breathe some fire into this contest as Eastern got on the board early with a goal by Trent Cody then followed by Michael Apeness which helped claw the Ranges back into the match. William Hayes hit back for the Dragons but it was all Eastern in this quarter who slotted another two goals from Christian Petracca with the Dragons lead cut to just six points going into the final term.

Eastern charged out the blocks in the final term with goals from Matthew Traynor and Mitchell Honeychurch putting them in the driving seat as the clock wound down. Inaccuracy continued to hamper the Dragons efforts to get back in the match, as Eastern dominated the early stages of the quarter. Another goal from Trent Cody helped to give the Ranges a slight lead.

The final seven minutes were frantic as both sides struggled to keep ahold of the lead. Sandringham managed to wrestle the ball free to slot home two quick goals from the boots of Malcolm Neiwant and Christian Salem to quiet literally steal the win from underneath Eastern’s nose.

Sandringham displayed a never-say-die attitude and endured a spirited performance from the Eastern Ranges to take home the win.

Next up for Sandringham is a battle against the Dandenong Stingrays at Shepley Oval while the Eastern Ranges take on the Gippsland Power at the Morwell Football Ground after the development weekend off.