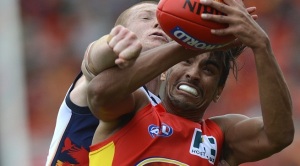 The 201cm Gold Coast Suns ruckman played his best game to date holding his own against Richmond’s ruckmen Ivan Maric and Ty Vickery at Cazalys Stadium in Cairns last Saturday.

He was named in the Suns’ best after he gathered a career-high 18 possessions, six marks, five tackles and 25 hit outs.

Tom, 21, played one AFL game in 2011 before a knee injury ended his season. He then played the entire 2012 season playing for the Gold Coast Suns NEAFL team.

In 2013, he has played six AFL games after breaking back into the side in Round 10 following an injury to Zac Smith. Since then he has shouldered the responsibilities of being the Suns’ sole ruckman and in doing so has averaged 24 hit outs and14 possessions. He kicked two goals against Essendon in Round 12.

“Tom has done an outstanding job in the absence of Charlie Dixon and Zac Smith, despite the pair missing with injury, Tom has well and truly deserved his spot in the senior side and has continued to improve game after game.

“Over the past three seasons Tom has been developing his game to the point where he can now compete against some of the most seasoned AFL ruckman and that a credit to him and our development coaches,” he said.

Tom is the second Gold Coast player to be nominated this season following Jaeger O’Meara in Round Five.

From Fijian heritage, Tom was recruited from the Cheltenham Panthers Junior Football Club and the Sandringham Dragons. He arrived at the Gold Coast Suns as a 17-year-old access selection in 2010.

Tom represented Vic Metro in the 2009 NAB AFL Under-18 Championships and is an AFL-AIS Academy graduate.