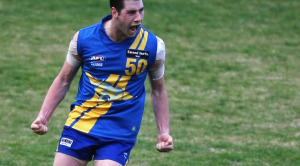 In wet and windy conditions, North Ballarat restricted the Jets to two behinds for the entire second half to almost pull off a remarkable upset TAC Cup victory.

The visiting Jets leapt out of the blocks with five goals to the Rebels’ two to put the home-side on the back foot.

The visitor’s lead grew to 36 points at the long break, and in arctic conditions it appeared the Rebels were headed for a heavy loss.

But from nowhere the home side stormed back into the contest, booting 4.8 to 0.2, and coming within a whisker of just their third win for the season.

Midfielders Brett Bewley and James Sicily were outstanding all day for the victors, providing class through the middle of the ground.

North Ballarat Rebels coach David Loader lauded the fight shown from his group in the second half.

"The second half was outstanding really considering the conditions. To come from six goals behind and get back within a kick was really good," Loader said.

"It was just a shame we weren't able to give a four quarter effort, which has been one thing we have struggled with this season."

Loader was again full of praise for gun midfielder Matt Crouch, who gathered a standout 36 disposals.

"Matty is just so influential around the ball. He's a great learning tool for the group about how to play the game in the middle," Loader said.

"Darcy is an exciting young fella and there's no doubt he looked comfortable at times," Loader said.

The speedy Dan Butler also played what Loader described as "his best game for this group."

The Rebels have another home game this weekend, facing off against Dandenong Stingrays on Saturday at 1pm.