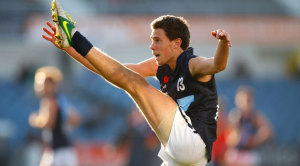 A TOTAL of 43 players from the TAC Cup have been invited to October’s NAB AFL Draft Combine.

Seven players from the Sandringham Dragons, seven from the Geelong Falcons and six each from the Murray Bushrangers and Oakleigh Chargers make up a healthy contingent from Australia’s best underage football competition.

The nine TAC Cup players chosen in the All-Australian team following the NAB AFL U18 Championships, including first-round draft prospects Josh Kelly, Tom Boyd and Lewis Taylor were all offered invites to the Combine, alongside others who have impressed solely through their TAC Cup performances.

Selection at the Combine relies on interest from AFL recruiters with a player needing at least five clubs to request their attendance.

Over five days, players will undergo a series of fitness and skill-based tasks, including the gruelling beep test, the 20m sprint and the Nathan Buckley kicking test.

The Combine will also enable AFL clubs to come-face-to face with the country’s best talent and interview potential draftees.

A host of other players will receive an invitation later this week to attend the state combine, which consist of the same high performance measures as the National Combine.