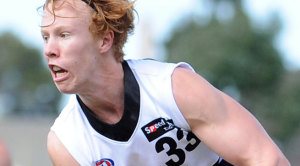 THE countdown to finals had begun and Round 15 promises to dictate the fate of a number of TAC Cup sides, writes Madeline Grech.

The Geelong Falcons, hoping to bounce back from a loss to the Northern Knights last weekend, travel to Epsom Huntly Reserve to take on the Bendigo Pioneers.

James Tsitas had a major impact on last weekend’s game, racking up 42 disposals in a best-on-ground-display. Tsitas is one of seven players from the Falcons who have been invited to October’s NAB AFL Draft Combine, among 43 players from the TAC Cup to be selected.

The North Ballarat Rebels host the Dandenong Stingrays on Saturday afternoon, looking to build on improved showing last weekend against the Western Jets.

The Rebels stormed home to fall just six points shy of the Jets, with co-captain Matt Crouch dominant with 36 disposals.

The Stingrays will be out to cement a top four position as they take on both Gippsland Power and Geelong in the last two rounds of the home-and-away season.

The Western Jets will also being eyeing a top four birth when they meet the tenth-placed Oakleigh Chargers at Warrawee Park.

The Jets’ last three games have all ended in margins in a goal or less, a finish they will be hoping to avoid against the Charges.

Co-captain Brett Bewley and midfielder James Sicily were outstanding last weekend, providing class through the middle of the ground.

Sicily was he only Jets player to be invited to the NAB AFL Draft Combine.

The Chargers will rely on Nick Prowse and fellow ruckmen James Toohey and Angus Milham to take charge in the centre square.

The Murray Bushrangers will be hoping to bounce back as they head to Bayswater to take on the second-placed Eastern Ranges on Saturday afternoon. The Bushrangers will be looking for revenge after losing by 23 points back in Round 5 against the Ranges.

Vic Metro stars Mitch Honeychurch and Michael Apeness will both look to back up last round’s best-on-ground performances against the Bushrangers.

The Cannons are desperate to cement a finals’ spot with a win over the ninth-placed place Sandringham Dragons. The clash looms as one of the more exciting games in Round 15, with the Dragons looking to bounce back against the Cannons at Preston City Oval on Sunday morning.

In other matches, the Northern Knights take on the third-placed Gippsland Power on Sunday Afternoon.

The Knights are coming off a thrilling win over the top-of-the-table Geelong Falcons.

Knights midfielder Josh Turner (pictured) racked up 29 disposals to be a star last weekend and will need to reproduce that form if his side hopes to prevail again.

The Power will look to bounce back after a narrow loss to the Eastern Ranges last week.