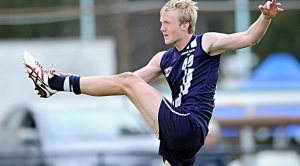 THE 2013-14 AIS-AFL Academy Level One and Level Two Squads have been announced, with 29 TAC Cup players selected from the 61 squad members named.

The AIS-AFL Academy commenced in 1997. Since that time, 33 graduates have played in a premiership, 25 have been named an All-Australian at least once, 18 have won their club’s best and fairest, 11 have been the number one selection at the NAB AFL Draft, four have won the NAB AFL Rising Star and three have won the Norm Smith Medal.

“The players will experience elite training and mentoring that will help their development both on and off the field. Both squads will also represent their country overseas which is unique in our game.

“We are constantly striving to give the players the best preparation for life as a professional athlete,” he said.

The Level One squad was selected following the NAB AFL Under-16 Championships. They will be coached by AFL Engagement and Talent Co-ordinator Chris Johnson.

The Level One Academy features bottom age players, with 15 from the TAC Cup having been selected. The Dandenong Stingrays and Murray Bushrangers each feature three representatives, Geelong Falcons, Gippsland Power and Sandringham Dragons have two players each and Calder Cannons, Eastern Ranges and North Ballarat Rebels all have one player chosen.

AIS-AFL High Performance Coach Michael O’Loughlin will coach the Level Two squad. Players in this squad are eligible to be drafted in 2014.