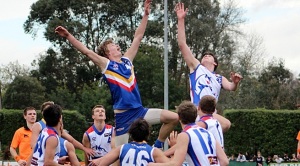 THE Eastern Ranges continued their run to the finals with a hard fought win over the Oakleigh Chargers by 16 points on Sunday at Box Hill City Oval, as Davis Harrigan reports.

With the chance to guarantee themselves second spot on the ladder, the Ranges were hungry for the ball early.

After a scrappy start, goals to Michael Apeness, Matthew Traynor and small forward Andreas Roth finally got the ball rolling for the Ranges.

Ball use was critical in the tough conditions. The Ranges pounced on a host of Oakleigh errors to open up a 28-point lead at quarter time. The highlight of the quarter belonged to Daniel McStay, who wheeled around off one step to sail home his first from 55 metres out.

At the quarter time break, Oakleigh coach Justin Wenke wanted his side to lift their intensity in the second term.

Wenke’s words hit home as Oakleigh peppered the goals but inaccuracy cost them early kicking four consecutive behinds before Billy Hogan added the Chargers second goal. Trent Cody pegged the Oakleigh run with a late goal for Eastern, and the half time margin was 18 points.

Clouds rolled in for the second half, and the powerful winds made the ball float in the air like a balloon at times. After Oakleigh gained the early advantage in the term, Ranges captain Ben Cavarra slotted one through to give themselves a handy buffer.

Oakleigh’s Jay Kennedy Harris, highly touted to be drafted to the AFL, produced some superb second and third efforts during the third term. Will Maginness and Aidan Franetic were also among Oakleigh’s best.

With a 28-point lead at three quarter time, the Ranges looked home, but a flurry of late goals, including two to Jack Sinclair, kept the Chargers in touch. Ultimately time ran out, Roth kicking the last major of the match to give his side a 16-point win.

The victory means the Ranges cannot drop below second place, and will head into the finals feeling confident. It has been a massive turnaround for the side, with Eastern having finished last in season 2012.

The progress of their second year players has helped the Ranges return to finals football this season.

“Last season we didn’t get going at all. To the boys credit, they did everything we asked them to for the majority of the time…it is pleasing for the club and the region that we are in this position,” Ranges coach Darren Bewick said.

Contested ball use was the key to winning under the murky skies against the Chargers.

“They’re (the Chargers) are very good if given time and space to use the ball. I thought our players really shut them down. I was really pleased with the defensive efforts, both in the midfield and down back.”

Finals loom, but it is one week at a time for Bewick, the focus being to continue playing aggressive footy next week.

The Ranges will travel to Craigieburn next weekend to face the Calder Cannons, while Oakleigh will host North Ballarat at Warrawee Park.