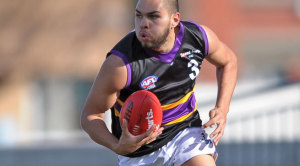 THE Murray Bushrangers enter this weekend’s TAC Cup final series the underdogs after scraping into the top eight. But they’re not just here to make up the numbers, writes David O'Neill.

The Bushrangers survived a thriller against the Northern Knights last weekend to secure a date with the Western Jets this Sunday.

The three-point victory included a controversial finish when a siren from a neighboring ground caused the controlling umpire to signal full time with still a handful of seconds left on the clock.

Amid the confusion the Knights celebrated what they thought was a match-winning goal, only to have the ball taken back to the top of the 50m for a ball up.

The visitors’ pain was later eased when it was revealed the flying shot at goal had in fact sailed wide and – had it been allowed – would have only registered a behind.

The loss saw the Knights drop to sixth on the league ladder, while Murray was able to hold off the Sandringham Dragons to claim eighth spot.

Bushrangers Talent Manager Andrew Carson said the win would hopefully instill some belief in the side.

“We’ve got an outstanding group of young man this year, and I know everyone probably thinks the same but we feel our boys probably deserve a crack at finals,” he said.

“At different times this year we’ve shown we can match it with the best teams in the competition and we’re certainly not going in just to make up the numbers.”

Midfielders Nick Holman and Michael Gibbons and utility Jarman Impey, all of whom were in the Bushrangers’ best players on Saturday, were in a group of six from the region to be invited to the NAB National Combine in October.

“History shows that playing finals can help players press their case but our focus will be on having 22 guys playing their role.”

“A strong team performance is always the best way for individuals to show what they can do.”