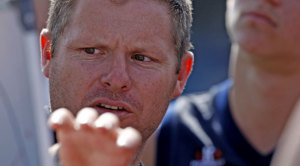 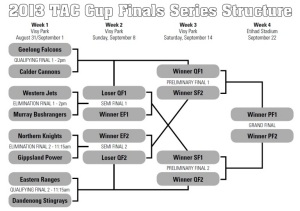 THE TAC Cup season is once again set for an entertaining finish as the 2013 finals begin with four tantalising matchups, as Justin Jenvey reports.

2013 sees the opportunity for a new premier after the last year’s champions the Oakleigh Chargers failed to make the finals. Along with Oakleigh, the North Ballarat Rebels and Sandringham Dragons don’t return to September and are replaced by Eastern Ranges, Northern Knights and the Western Jets.

At this stage Geelong would appear favourites to take the title after a fantastic home and away season. The Falcons have moved from the bottom of the eight in 2012 to the top of the eight in 2013 after recording 14 wins and are a very good chance to make their first Grand Final since 2000 when they claimed the premiership.

That year they took on the Eastern Ranges and there is every chance that this season’s Grand Final could be contested by the same two teams. Eastern Ranges jumped 10 spots up the ladder to second to make their first finals appearance since the 2009 season. Darren Bewick’s men will be looking to add another premiership to the teams 2002 triumph.

Dandenong Southern Stingrays have again had another successful campaign having made the top four for a sixth consecutive season. The Stingrays will be looking to make up for a straight sets exit from last season’s finals. This year’s team has a good opportunity to win the team’s maiden premiership, something which has eluded them in the past.

The perennial powerhouse of the last decade, Calder starts another finals series looking to add to their already impressive trophy cabinet. Their first challenge will be trying to beat the top placed Falcons, who they knocked out of the finals in 2010. The Cannons have been extremely impressive of late having knocked of the Falcons and Eastern Ranges in the last two rounds.

The Western Jets return to finals action after missing out last year and will take on Murray in what should be a good match. The Jets haven’t made an extended run in the finals for a number of years and that’s what they’ll be aiming for.

Northern Knights are another team to return to finals play, ending a two year absence from September. The Knights last finals win was way back in 2007 so they will hope for at least one win this time round. They play the same opponent who knocked them out of the finals when they met in 2010.

Last year’s grand finalists Gippsland again return for another shot at a premiership. In the last four years the Power have twice lost grand finals and twice been knocked out without winning a game after securing a double chance. It’s going to be a tough task to go all the way from seventh but those returning from 2012 will be hungry after the disappointment of last year’s one point loss.

Murray have had mixed results over the last five seasons, missing out on finals on two occasions, losing in the first week twice and of course winning the 2008 premiership. The Bushrangers play the Jets and will look to avenge a 10 goal loss from round eight and advance deeper in to September.