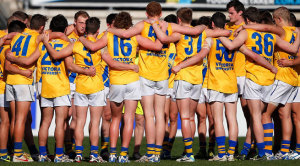 The Western Jets are through to the semi finals after a thrilling come-from-behind victory over the Murray Bushrangers on Sunday, as Justin Jenvey reports.

The hard running David Iaccarino bagged three goals and collected 28 possessions to be one of the Jets’ best, alongside hard-nut Jake Greiser (31 disposals and a goal).

James Sicily also bobbed up with two goals, while Lachlan Hickey was instrumental across half forward with his defensive pressure.

Murray’s best included on-baller Michael Gibbons (29 disposals and a goal) and Nick Holman (22 and a goal), while Joseph Cousins (22 disposals) was another significant contributor.

In windy conditions at Visy Park, the Bushrangers got off to a flying start, playing some of their best football of the season, moving the ball quickly and efficiently by foot.

Nick Sneyd got the Bushrangers off to the best possible start when he goaled just three minutes in to the match.

But the Jets gained the lead shortly after as a James Sicily snap and Billy Myers soccer off the ground found the middle of the goals.

Murray found their rhythm mid way through the quarter and three quick goals from Jydon Neagle, Nick Holman and Bryden Squire gave them the advantage.

However, the Jets didn’t let the Bushrangers get away and when Sicily marked and converted from the goal square just before quarter time the difference was cut to 17 points.

After a free following first quarter the game changed and became a hotly contested battle with only two goals being scored for the quarter.

Murray again got the first of the quarter as Michael Gibbons continued his good form as he goaled on the run.

The Jets followed with one of their own when Matt Singleton intercepted a kick from Jackson Clarke.

In the third, goals were again hard to come by until a major from Jake Sharp gave Murray a 26-point buffer at the 15 minute mark.

But the Jets continued to press and with David Iaccarino and Jake Greiser leading the charge they were able to gain the ascendancy.

A late goal to Iaccarino and a number of other chances proved the contest was far from over.

The Jets began the final term with a number of opportunities but failed to capitalise in front of goal.

Finally they were rewarded when Iaccarino bagged his second after a smart bit of play.

Murray tried to hold on but with fatigue and skill errors setting in it was the Jets who became the dominant side.

With just five minutes left on the clock the Jets’ persistence and hard work payed off, Greiser giving his team the lead when he goaled after a boundary throw in.

And when Iaccarino charged through traffic and booted another goal shortly after, the Jets had sealed an extraordinary comeback victory.