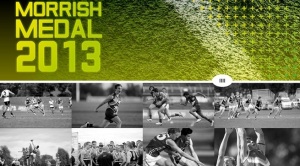 SO who are the hot tips from the TAC Cup coaches for the Morrish Medal on Sunday night?

Ahead of the 2013 Morrish Medal count we spoke to club representatives from the 12 TAC Cup regions to see who they thought might claim this year’s medal.

The Morrish Medal will be live video streamed via the TAC Cup website on Sunday night from 7pm for those that are unable to make the event.

Here are the most popular selections:

Lewis Taylor is hot favourite to win this year’s Morrish Medal according to the majority of club representatives. Despite only playing nine home and away matches due to his participation in the NAB AFL Under 18 Championships for Vic Country, the classy midfielder has averaged over 31 disposals per game when playing for the Falcons. He had 20 or more disposals in every game with the best a 40 disposal effort against Sandringham in round 8. He featured in the best six times and is a good chance to poll the maximum votes in all of those game.

Josh Turner has been one of if not the most important players for Northern this year, taking on a large responsibility when experienced teammates have been away on representative duties. In his first season at TAC Cup level, as well as being one of his teams most consistent performers, he has also been one of the competitions most consistent players. Turner played every game during the home and away season averaging 24 possessions and 4.5 tackles per game and was named in his team’s best players on nine occasions. Having played all 17 regular season games Turner should find votes in enough games to be near the top.

In a year when the Eastern Ranges finished 10 places higher on the ladder then they did a year earlier, midfielder Ben Cavarra has been one of the main contributors behind the team’s strong 2013 form. Since making his TAC Cup debut in 2011 Cavarra has developed in to one if the key cogs in Eastern’s midfield. Despite missing a number of games due to Vic Metro commitments Cavarra appeared in 13 regular season matches for Eastern gathering 24.5 disposals per game and laying an average five tackles each week. With his team winning 12 games this season it increases Cavarra’s odds of gathering votes.

After only playing four games in 2012, Alex Carr didn’t miss a game during this year’s home and away season and played a key part in helping Gippsland return for another TAC CUP finals campaign. This season Carr averaged 21.5 possessions per game, three times having more than 30 kicks in a match. The winger also laid 4.5 tackles per game and contributed on the scoreboard with 22 goals. When you have as many kicks as Carr per game (on average 18) you are likely gain the attention of the umpires so don’t be surprised if he polls well.