TAC Cup Team of the Year 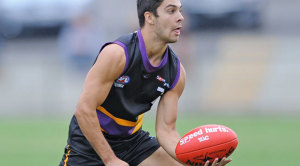 All 12 regions are represented with the Geelong Falcons topping the list with four members in the squad.

Despite a mid-season ankle injury, Eastern Ranges power forward Tom Boyd impressed enough to be selected at full forward, while North Ballarat Rebels tough-nut Matt Crouch also overcame his own injury worries to be named in the centre.

Geelong Falcons duo Fraser Fort and Darcy Gardiner were named in the two key defensive posts, joining teammate Lewis Taylor who was named on a half forward flank and James Tsitas on the interchange.

Zak Jones (Dandenong Stingrays) and Louis Herbert (North Ballarat Rebels) were rewarded for their stellar seasons with a berth in the back six, alongside 19-year-old prospects Jake Owen (Calder Cannons) and Tom Langdon (Sandringham Dragons).

Excitement machines Billy Hartung (Stingrays) and Josh Kelly (Dragons) are the side’s two wingman, a mouth-watering proposition if the team was ever to play an actual match.

The followers, all rewarded for their consistency, are Jack Leslie (Power) Jacob Chisari (Bendigo Pioneers) and Michael Gibbons (Murray Bushranges).

While not able to force their way into the starting 18, the extended interchange is chock full of stars.