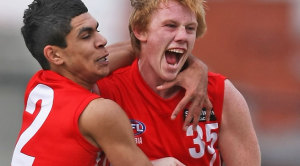 SUCH was the number of accolades Josh Scott took home last night, it was joked the Gippsland Power forward might as well stay on stage, writes David O'Neill

Fresh from accepting the TAC Cup leading goalkicker award and a spot in the Team of the Year, Scott was called back to the microphone as one four joint winners of the Morrish Medal.

The four couldn’t be split after 17 rounds of voting and each spoke of the surprise of having he unexpected honour bestowed upon them.

For Scott, it caps a remarkable year after returning under the 19-year-old rule to kick 51 goals and force his way into draft calculations.

In a remarkably consistent season, he booted a goal in every match he played, including a return of nine against the Pioneers in Country Round in April.

On the back of his TAC Cup form and two appearances for Victoria Country at the NAB AFL U18 Championships, the 190cm key forward has been added to the invitee list for the NAB AFL Draft Combine in October.

The call-up is just reward for a player who has dedicated the last two years of his live to making the most of his football career.

“My goal is to play at the highest standard I can and just enjoy my football,” Scott said.

“It would mean the world to me to be selected by an AFL club. It’s what I’ve been aspiring to for the past three years and to get an opportunity would be amazing.”

As an Essendon supporter, Scott says he tries to model his game on his favourite player Michael Hurley, but it is someone else who adorns his bedroom wall.

The 19-year-old’s grandfather, Reg ‘Dodger’ Ryan, played for North Melbourne in the 1940s and, despite his passing two years ago, continues to be influence on the rising star.

“He was hard-nosed and if he thought I didn’t go in hard enough I’d be hearing about it for the next three weeks,” Scott said with a grin.

“I’ve got the poster on my wall of him and Teddy Whitten in a bit of scrap that made the front page of the paper.”

Only time will tell if Scott has done enough to impress AFL recruiters but for now he’s still coming to terms with joining the distinguished list of names on the Morrish Medal honour roll.

“I came here tonight not expecting this at all and it’s still sinking in to be honest.”

“It’s a great honour to share this award with the other guys and I’m still pretty lost for words.”