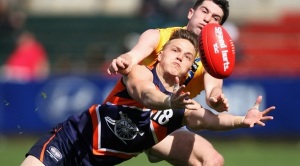 A commanding final term has propelled the Calder Cannons into a preliminary final clash with the Dandenong Stingrays next week, accounting for the Western Jets by 35 points on Sunday.

After a close contest for three quarters, the Cannons kicked away in the final quarter, booting six goals to three, as Peter Williams reports.

After losing to the Falcons in the Qualifying Final the week prior, the Cannons had a point to prove. They managed to do just that, outlasting the Jets by continually harassing them with bone-crunching tackles.

A pivotal moment occurred early in the game when the ever consistent David Iaccarino injured his shoulder and while he played on, he didn’t have the impact that fans have come to know from the experienced midfielder. In his place, Lachlan Hickey and Brett Bewley were busy in the midfield while Liam McMahon also found his fair share of the ball. James Sicily was a crucial target up forward booting three goals, but he was a lone hand as the only multiple goal kicker.

Calder’s much talked about talls in Reilly O’Brien, Peter Wright and Mark Kovacevic were effective, with O’Brien laying a number of important tackles.

At three quarter time the margin was 18 points - three more than the deficit that the Jets overcame in the elimination final to knock out the Murray Bushrangers. Unfortunately for them, lightning wasn’t to strike twice and it would be Western who would be wrapping up season 2013.

Calder Cannons move through to the preliminary final on Saturday to face the Dandenong Stingrays for a spot in the 2013 TAC Cup Grand Final. In a game which saw them run away with it in the last quarter, the Cannons can be pleased how they reacted to a disappointing second half the week before.

They have room for improvement with star midfielder Matt Merlo quieter than usual and Jason Cooke down from his impressive game against the Falcons. Jake Owen and Aaron Christensen were two of the best while Anthony Prestia was also able to provide plenty of run and carry.

Western Jets are now looking to season 2014 with plenty of talented youngsters coming through the ranks. The likes of Pete Manivong, Connor Menadue, Lachlan Hickey and Billy Myers are all players who will be hoping to take the next step up next season and become top-line players.

If the Jets can continue to improve over the off-season, there’s no reason they can’t better their fifth-placed finish in 2013.