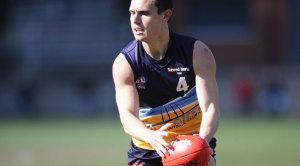 YOU can teach kids to be better kicks, to be more confident over the ball and to follow team rules, but you can’t teach what Jacob Chisari has in droves, writes David O'Neill

The Bendigo Pioneers skipper has turned his life upside down in the pursuit of an AFL career, carving out a reputation over the past two years as one of the most determined players in the TAC Cup competition.

On Sunday night that determination and hunger to be the best footballer he can be, was rewarded with a Morrish Medal.

With interruptions to the TAC Cup competition, such as school football and NAB AFL U18 Championship, picking winner for the Morrish Medal can be as difficult as backing a Melbourne Cup winner.

But few at the Bendigo Pioneers were surprised when one of the favourite sons finished atop of the leaderboard.

Talent Manager Ray Byrne and coach David Newett have known for a long time that they’ve had a pretty special footballer in their midst.

Byrne says he’s known it since a young boy from South Mildura opted to relocate to Bendigo in order to have the best possible chance of succeeding with the Pioneers.

And he’s been reminded of it at every game in the past two years with the support Chisari has received from his family.

“We’ve had at least one Chisari at every game Jacob’s played in the past two years,” Byrne said.

“They’re a great family and always supportive of Jacob and us as a club.

While parents Frank and Wendy make the regular trip from Mildura, Chisari lives in Bendigo where he shares a house with teammate Josh Cua and attends Bendigo Secondary College.

“Since day dot he hasn’t missed a beat and just got on with life and taking care of himself.”

“He’s determined to play AFL football and he’s left no stone unturned in his attempt to make that happen.”

In a sign of things to come, Chisari won the Pioneers' best and fairest trophy as a bottom-age player last season, thriving under the captaincy of now Port Adelaide revelation Ollie Wines.

The prolific ball winner polled in eight games this year and became an almost permanent fixture in his side’s best players each week, playing a similar brand of football to his former skipper.

“I thought his (Wines) season last year was phenomenal so I sat down with him at the end of last season and spoke about the best way to prepare for games,” Chisari said.

“He was a great leader and always very encouraging of the young guys, and that’s they how I’ve tried to captain this year.”

At 175cm, Chisari faces an uphill battle to win a berth on an AFL list but Byrne said his ball winning ability can’t be ignored.

“When you keep finding the ball as much as he does, and keep using it well, then eventually people will have to stop and take notice,” he said.