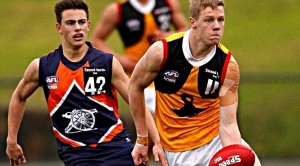 DANDENONG Stingrays stand in the way of Calder Cannons adding yet another chapter to its extraordinary history.

The Cannons are searching for its ninth Grand Final appearance in the past 13 seasons.

History tells us that no club has been more successful when it comes to premierships this millennium than Calder, which has claimed six premierships.

Conversely, Dandenong is still waiting to savor its first flag. Four trips to the big TAC Cup dance, the most recent in 2009, have resulted in nothing except heartache.

In fact, Calder added to that long-suffering pain when it defeated the Stingrays by 14-points in the 2009 TAC Cup Grand Final.

Both clubs enter the Preliminary Final on the back of strong second half of the season form.

Calder made it to the Preliminary Final with seven wins from its past nine games, including wins against Geelong and Eastern near the end of the home and away season.

After Geelong comfortably defeated them in the Qualifying Final, the Cannons were untroubled to defeat Western Jets by 35-points in last week’s Semi Final.

It set up a meeting with Dandenong, which they defeated by seven goals back in Round 8. It was at a time when both clubs had players unavailable because of the NAB AFL Under 18 Championships and school commitments.

Dandenong finds itself in yet another Preliminary Final after it won six of its past seven games. Its only loss was against Geelong (41-points) in the final home and away game.

The query on Dandenong is that most of those wins came against clubs outside or on the fringes of the eight.

Calder’s path to the finals was much tougher and as previously mentioned they defeated both this week’s other Preliminary Finalists – Geelong and Eastern.

The Stingrays spring boarded into the Preliminary Final with a convincing 33-point win against Eastern.

Both coaches Graeme Yeats (Dandenong) and Andrew Jago (Calder) will be looking for their players not to do anything heroic, but simply play their role and do the small things required to advance the cause of the club.

Calder has been well served by Jake Lever, Jake Owen, Reilly O’Brien, Matthew Merlo and Aaron Christensen, who played his best game for the season last week against Western Jets.

The Cannons may just have the edge in a tight contest.