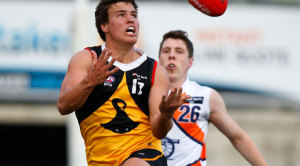 The Dandenong Stingrays have held off a spirited Calder Cannons outfit to reach the 2013 TAC Cup Grand Final, as Peter Williams reports.

Onlookers were treated to see-sawing encounter with more 30 goals kicked between the two sides despite the overcast conditions.

The shootout began almost immediately when eight goals were kicked in the opening term, four to either side.

Dandenong’s Clayton McCartney and Calder’s Aaron Christensen were lively early, each hitting the scoreboard with clever snaps inside 50.

It was the story of the match with small and medium forwards causing the most damage while the big men eventually got into the action later in the day.

Some classy disposal by foot from Ben Allan led to goals to Jason Cooke and Victor Carboni and the Cannons were able to level the scores at quarter time.

The second and third quarters belonged to the Cannons as they booted seven goals to five and looked dangerous around goal with Josh Cauchi and Jason Cooke kicking six goals between them and giving their side the advantage.

But just as it looked like the Cannons were going to run away with the match, the Stingrays ripped up the script and kicked six unanswered goals, including the first five of the last quarter to hit the front.

The resurgence was thanks largely to Blake Mullane (three goals) and Jack Lonie (three) up forward, with the latter particularly impressive considering he was helped from the field in the first quarter after taking a heavy knock in a marking contest.

With great support from Zac Jones and Billy Hartung, Lonie provided some crucial midfield run that was limited early due to Calder’s tackling pressure and contested ball winning ability.

Once the likes of Hartung and Jones got free, the Stingrays were away and gave silver service to the likes of Brady Egan (three goals) and Matt Rennie (two) up forward.

But just as the Stingrays looked home, there was another twist left in the tale with the Cannons booting two quick goals to draw within five points and give hope to their legion of fans.

Unfortunately for the Cannons, the Stingrays were able to steady and secure a 12 point win and a Grand Final spot.

The Stingrays best were without doubt Jones, Hartung and Lonie, while McCartney and Mullane were influential in opposing halves.

Now full of confidence, the Stingrays will meet the Eastern Ranges this weekend’s Grand Final at Etihad Stadium.

For Calder, Aaron Christensen, Jake Owen and Victor Carboni were among their best with the latter no doubt one to watch in 2014.