Boyd could return in Grand Final 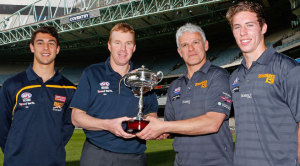 The player tipped by many as the No.1 pick in this year’s NAB AFL draft has put his hand up to take on the Dandenong Stingrays at Etihad Stadium.

It’s been a long three months since Boyd injured his ankle while playing for Vic Metro and Ranges coach Darren Bewick said he was hopeful the key forward would prove his fitness.

“I think I’d find a place for him,” Bewick joked when asked if he’d pick Boyd if given the tick of approval by the Ranges’ medical staff.

“He hasn’t played for 13 weeks and only started training a couple of weeks ago so we we’ll be reliant on what our medical staff say.”

“To his credit, he (Boyd) has put up his hand to play but ultimately the final decision will probably fall to our high performance manager.”

In further good news for the Ranges, Bewick said tough midfielder Mitch Honeychurch was a 75-80 per cent chance of returning from a hamstring injury.

The star duo would be welcome additions in the clash against the Stingrays, a side which defeated the Ranges comfortably in the qualifying final a fortnight ago.

“We have got a few players back and the boys have worked really hard throughout the season to get to this opportunity and now they just have to make the most of it,” Bewick said.

Regardless of whether Boyd plays, the Ranges are likely to rely heavily on bottom-age star Christian Petracca.

The mobile forward booted five goals last weekend to help his side overcome the highly fancied Geelong Falcons and taken his season tally to 41.

With the 199cm Michael Apeness likely to share the forward line with Petracca at stages, along with the possible inclusion of Boyd, the Ranges’ forward set up could be the difference between the two teams.

Despite not boasting a bevy of key defenders, Stingrays coach Graeme Yeats said he had gained confidence from his side’s performance against the Calder Cannons last weekend.

“We’d love to pull a six foot five defender out of a tree, we just don’t have that luxury,” Yeats said.

“But last week we played a team (Cannons) with three 200cm players inside their forward 50, and we have three or four really good backs, who are developing well and who we think will play AFL football.”

A final decision on the makeup of both sides won’t be made until Thursday night with Boyd likely to face a fitness test in order to take his place in the Ranges’ lineup.

To follow the action live on Sunday visit TACCup.com.au for video streaming details.