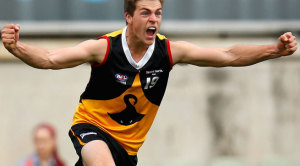 In their own eyes, the Dandenong Stingrays still see themselves as the underdogs, writes David O'Neill

After spending the majority of the season on the middle rungs of the ladder, coach Graeme Yeats and his playing group are still coming to terms with their charge towards the region’s first ever premiership.

The Stingrays’ form over the past 10 weeks has been nothing short of sensational.

Seven wins from eight matches, including a 33-point win over the Ranges in a pressure-packed qualifying final, has Yeats’ men primed for one final victory.

“We believe our best is good enough and that’s the level we have to get to,” Yeats said when addressing the media on Tuesday.

“With five or six weeks to go we were eighth and we thought if we could play a final it would be a great experience for our kids.”

“Like a snowball at the top of the mountain, as the snowball has rolled down, we've gathered momentum and our kids have just improved and been able to sustain high intensity efforts over 100 minutes.”

Stingrays captain Nathan Foote said winning the Stingrays’ first ever premiership would be an honour.

“It goes back to all those players who have pulled on a jumper. It means a lot, not just to the playing group and staff now, but everyone who has been involved over the years.”

Foote has been one of the unsung heroes of the Stingrays’ season, playing a critical role in a miserly defence alongside James Harmes and Josh Pickess.

And, in latter part of the season he’s also had Billy Hartung for company.

The excitement machine has adapted nicely to his new role off half back, giving the Stingrays a rebounding weapon like no other in the competition.

“Billy’s a tough one and we don’t even know yet where his best position is, but we just felt a few weeks ago and that he needed a challenge and we put him back,” Yeats said.

“It’s really worked for us and he’s a terrific rebounding player who is still running as hard in the fourth quarter as he does in the first.”

Another key to the Stingrays’ late season charge has been the form of Zak Jones.

The young brother of Melbourne’s Nathan Jones has been a revelation this year, playing an uncompromising brand of football.

After making his name across half back, Jones starred for Vic Country at the NAB AFL Championships before moving into the midfield of late.

He was at his best in last weekend’s preliminary final win over the Calder Cannons, secured despite trailing by 15 points at the last change.

Jones laid 10 tackles while collecting 24 disposals to help drag his team over the line and prove why his draft prospects have soared this season.

“Zak’s become an elite player at this level,” Yeats said.

“He’s tough, runs straight, competes and would eat a footy… we give him very simple instructions about his role and just let him go.”

Jones and Hartung, along with key forward Jack Lonie and the classy Daniel Capiron will need to be at their best if the Stingrays hope to salute on Sunday.

Fresh from an impressive preliminary final win over the highly fancied Geelong Falcons, and set to recall star duo Tom Boyd and Mitch Honeychurch from injury, the Ranges have their own claims on favouritism.

To see the game streamed live, visit TACCup.com.au on Sunday