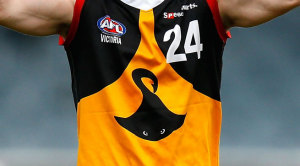 Dandenong Stingrays will be without one of their key personnel at this Sunday’s TAC Cup Grand Final.

His season’s stats aren’t very impressive and his goalkicking even worse, but Mark Wheeler was destined for a big role in Sunday’s premiership decider against the Eastern Ranges.

That was until Paris came calling.

The Region’s talent manager, and in many ways the architect of the Stingrays’ program, Wheeler will be absent for the most important game of this season due to an overseas holiday.

While his chargers have been battling nerves this week, Wheeler has been in the early stages of what he describes as a once-in-a-lifetime journey.

“We have a wedding in south of France and my wife convinced me to go after we lost games against Northern and Oakleigh late in the season,” Wheeler said.

“Life at times is bigger than a game of footy so the chance to go with my two children and experience Paris and Switzerland is something I will cherish forever.”

“It’s (the TAC Cup Grand Final) not about me, that’s what I have told myself, but I am gutted I will miss it.”

Wheeler, in his third year as talent manager for the Stingrays said his work was done well before this week.

“My work was done two years ago putting this list together and putting together the coaching and support staff,” he said.

“I am so proud of what we have achieved this year. I really trust and believe in my staff who will handle it.”

The Stingrays, which entered the competition in 1992, have never won a TAC Cup premiership.

But after finishing runners up on four occasions, Wheeler hopes the time has finally come to end the drought.

“Each time we have made the grand final in the past, injuries have robbed us a little or we have finished on the wrong side of the draw.”

“This time I think we come into the finals firing and have lifted with each finals game.”

Being overseas won’t stop him from watching the game either.

“I will watch it via live streaming from Paris and have downloaded an app to allow free calls and text from OS.”

“Fingers crossed we can stop being the bridesmaid and add some, or the only piece of silverware, to the newly renovated offices in 2014.”

The TAC Cup Grand Final will kick off on Sunday at 10.30am at Etihad Stadium, and for those playing at home, that’s 2.30am Paris time.