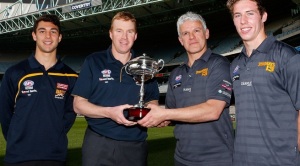 Will Dandenong Stingrays find that elusive first premiership cup, or will Eastern Ranges complete a stunning rise up the ranks of the TAC Cup ladder in the last 12 months?

DANDENONG Stingrays’ record over the TAC Cup journey stacks up as well, if not better than most clubs.

The Stingrays, under Peter Russo, Greg Hutchison, Rob Dean and more recently current coach Graeme Yeats, have nurtured and developed some of the finest talent in the AFL over the past 20 years.

Impressive alumni by any assessment.

What is missing from the Stingrays’ CV is a premiership Cup.

Dandenong has been to the TAC Cup season finale four times and returned home each time with nothing to show for it.

Standing in the Stingrays way from accomplishing a cherished flag is Eastern Ranges, who’ll be searching for its second premiership.

Eastern returns to the Grand Final for the first time since 2004, when Calder Cannons thumped them by 70-points.

Dandenong’s last journey to a Grand Final was in 2009 when the Cannons defeated them by 14-points, while the previous year Murray Bushrangers ambushed them by 81-points.

The Ranges/Stingrays Grand Final was a meeting few could have foreseen in the weeks leading into the finals, or when they even began three weeks ago.

Dandenong was held to just five goals by Geelong which inflicted a 41-point loss in the final home and away match.

Eastern dropped its last match against Calder by 47-points and that set up a qualifying final match-up by the two Grand Finalists.

It was a match that the Stingrays controlled from the get-go.

With Nathan Foote, Zak Jones, Jordan Bastinac and Brady Egan all playing well, Dandenong took charge and held a 34-point lead at half time and comfortably held on for a 33-point win.

To its great credit, Darren Bewick has been able to regroup his squad and they responded with a 19-point win against Northern Knights in a Semi Final.

Most expected the Ranges’ march to the Grand Final to be stopped in the preliminary final where they ran into Geelong Falcons, the most dominant team throughout the home and away season.

Geelong rode into the Preliminary Final on the back of a 40-point win against the Cannons, and with Eastern still without its two key players – Tom Boyd and Mitch Honeychurch – went in as pronounced underdogs.

Nobody, however, told the Eastern players they weren’t supposed to win and led by Christian Petracca, who kicked five goals and Matthew Traynor with four goals, stunned the Falcons.

It was a tight contest with Eastern extending its two-point quarter time lead to 13 points at half time.

As expected, Geelong rallied in the third quarter to peg back the margin to nine points at three-quarter time to set up a massive last quarter.

The Ranges responded brilliantly. They answered every challenge and such was its pressure they eventually drew clear as they kicked 6.3 to 2.1 to post a 37-point win.

Eastern will take enormous confidence from the match.

Tough as nails James Belo was good in contested situations and Joe Fisher was another key contributor.

Speculation raged before the preliminary final about the possible return of Boyd, touted as the No 1 Draft pick, but that didn’t eventuate.

Boyd and Mitch Honeychurch, troubled by hamstring issues, are likely inclusions for the Grand Final. Both are likely first round selections in the AFL Draft.

Boyd and Honeychurch would be undoubted fillips to the Ranges, but what Eastern has learned in recent weeks is that they have a committed team that believes it can confront any other team, with or without its headline makers.

It’s pretty much what you see is what you get with Dandenong, whose second half of the season has propelled them from possible finalists to bona fide Grand Finalists.

The Stingrays’ blue-collar work ethic has been intrinsic in its wins. They play for each other and run both ways.

It was especially evident against Calder in the Preliminary Final when they firstly kept in the match with its hard running and then they backed themselves in during the last quarter.

The Cannons 15-point lead at three-quarter time quickly evaporated as Dandenong kicked 7.6 to 2.3 to run out 12-point winners.

While it may not have the ‘name’ players of Eastern, Zak Jones, Jordan Bastinac, Jack Lonie, James Harmes, Nathan Foote and Josh Pickess have enjoyed consistently good season.

Dandenong will need key forward Brady Egan to again put his hand up. Egan has kicked three goals in each final and again needs to impact the scoreboard.

Both clubs won’t leave anything in the change rooms. Expect this Grand Final to go down to the wire.