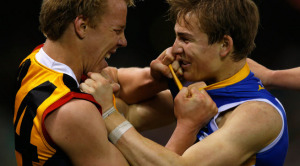 The Eastern Ranges have marched to their first TAC Cup premiership since 2002 after dispatching the Dandenong Stingrays today, writes David O'Neill.

An almost complete performance by the Ranges finished in a commanding 112-point victory, capping an amazing transformation after struggling to win a game in 2012.

A dominant first half set up a 49-point lead at the main break before the Ranges celebrated their triumph with a 10-goal-to-two final term.

The Stingrays, usually so precise by foot, made error after error to prove no match for a hard-running Eastern side.

While Daniel Capiron (20 disposals) and Billy Hartung (22 and two goals) tried their best to stop the Ranges’ charge, they were ultimately overwhelmed by a side hell-bent on premiership glory.

His ability to find the ball in close and use it on the outside was one of the features of the Ranges’ win, but he certainly wasn’t alone.

Cavarra was well supported by the work of hard-nut Jordan Walker (26) and the versatile trio of Connor O’Sullivan (22), Christian Petracca (21 and two goals) and Daniel McStay (18 and seven marks).

After much speculation about his fitness, Boyd took his place in the starting 22 and proved the difference in the opening term.

He bagged three before quarter time as the Ranges took control of the contest.

A 16-point lead at the first break was well deserved after showing none of the nerves that were seemingly strangling their opponents.

The men in yellow and black had little to hang their hats on with small forward Clay McCartney providing their only goal of the first half.

After kicking into the man on the mark, McCartney regathered tight on the boundary and threaded one from the behind post.

But apart from some fine defensive efforts from Capiron, it was the Ranges who impressed most.

Concerned by Boyd’s extra height, the Stingrays’ under-sized defence twice gave away free kicks to the 199cm giant, allowing him to return from an ankle injury in style.

Things only got worse for the Stingrays in the second term as the Ranges put the foot down.

Two 50m penalties and a clever snap saw Welsh finish the quarter with three goals of his own and his team with a 49-point advantage.

If the Stingrays were hoping for a form reversal in the second half they were soon on the back foot when Honeychurch and Petracca bagged the first two goals of the third term.

Finally after 11 unanswered majors, the Stingrays hit back with two in a row, both to the tireless Hartung.

But any plans of a fight back were soon scrapped when Jacob Crowe steadied on his left to goal and regain the ascendancy for the Ranges.

Despite Boyd shanking a set shot after the three quarter time siren, his side remained in control, 64-points ahead.

The flood gates quickly opened in the final term as the Ranges put a full stop on a stellar season with some of their best football of the year.

Boyd, after being well held for the middle two quarters, found his rhythm again, while Traynor made the most of his chances at the big man’s feet.

The 112-point margin may not have told the full of story of the difference between the two sides but it did prove the victory emphatic.

The Ranges now have two TAC Cup premierships to their name, while the trophy cabinet at the Stingrays remains bare.