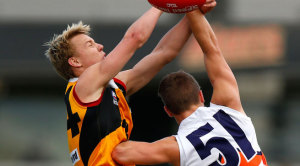 The TAC Cup’s reputation of producing AFL players was further enhanced this morning when 12 of the competition’s brightest young stars were picked up in the NAB AFL Rookie Draft.

Dandenong Stingrays defender James Harmes was the first to named today, snapped up by Melbourne with second pick in the Rookie Draft.

Harmes was closely followed by North Ballarat Rebels utility Louis Herbert (Gold Coast Suns) and Oakleigh Chargers midfielder Will Maginness (West Coast Eagles), who went at No.4 and No.5 respectively.

Maginness was one of four Oakleigh players to be selected with Jake Kelly (the son of Craig Kelly) finding a new home at Adelaide, James Toohey secured by Geelong and New Zealander Shem Tatupu joining Hawthorn as an international rookie.

Fellow Kiwi Kurt Heatherley has also joined the Hawks after playing with the Sandringham Dragons this season.

Geelong Falcons teammates Nic Bourke and Sam Russell were both given a chance to reach the elite level but in very different circumstances.

Bourke won’t have to travel far from his home in Noorat after being snared by Geelong, while Russell is heading to Port Adelaide to begin his AFL journey.