Goodes Australian of the Year 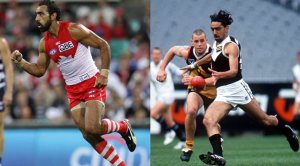 Former North Ballarat Rebel was last week announced as Australian of the Year as part of the Australia Day celebrations.

Goodes was recognised for his work with indigenous youth in the Goodes O'Loughlin Foundation, which focuses on education, employment and healthy lifestyles and aims to empower the next generation of Indigenous role models in all walks of life.

AFL Chief Executive Officer Andrew Demetriou today said the nomination of Adam Goodes as the 2014 Australian of The Year had brought great honour to competition.

"On behalf of the AFL Commission, our clubs and the wider game, the AFL is delighted and honoured that Adam Goodes has been recognised as the 2014 Australian of the Year," Demetriou said.

"Adam Goodes has been a brilliant player of our game for 15 years but his work off the field as a leading member of our community, seeking to assist and inspire young people, has truly defined him as a great Australian.

"Adam is a great ambassador for his people, the Sydney Swans and our game, and is a leader in reconciliation and bringing all Australian together.

"We congratulate him on his recognition as the Australian of the Year and we know he will continue to lead the way for a better country for all Australians."

Goodes was drafted from the Rebels in 1997 to Sydney, the year he helped North Ballarat to their only TAC Cup premiership.

He did not make his debut with the Swans till 1999, but made his mark on the competition that year, winning the AFL Rising Star award.

AFL Victoria and the TAC Cup competition congratulate Adam on his achievement.