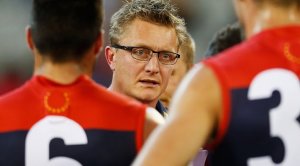 The former Melbourne coach takes over the role, which includes managing the Eastern Ranges team in the TAC Cup competition, from Anthony Parkin, who has been appointed to the position of Victoria/Tasmania Recruiting Manager with the Port Adelaide Football Club

Neeld was selected from a strong field of applicants, with his vast experience in football and background in the education system a key to his selection.

“He has a strong background in football, from community right through to AFL level, and we believe this will help him in this new role as he draws on his experiences with players, parents and key football stakeholders at all levels.

“Using his knowledge of the latest trends from the AFL will only benefit the Eastern Ranges as he helps oversee the identification and development of talented players in the region.”

Neeld played 74 AFL games for Geelong and Richmond before coaching at community level with Ocean Grove in the Bellarine Football League and St Joseph’s in the Geelong Football League. In 2005 he moved to the Western Jets in the TAC Cup, before joining Collingwood in 2008 as an assistant coach. He left the Magpies at the end of the 2011 season after landing the Melbourne senior coaching job.

He joins the Ranges after one of their most successful seasons in the TAC Cup competition, helping develop four AFL draftees – including GWS number one pick Tom Boyd – and winning the 2013 premiership.

“It is a really good opportunity,” Neeld said regarding his new appointment.

“The multifaceted nature of the role appealed to me, with it involving football operations, talent identification, player welfare and development amongst a number of other areas.

“It is a terrific program and competition, providing a number of players with an opportunity to be part of a high performance environment and to develop before possibly being drafted into the AFL system or to go on to VFL or other levels of football.”

He is no stranger to the TAC Cup competition, having previously coached for three years at the Western Jets, overseeing seeing the likes of Bachar Houli and Callan Ward as they progressed through to the AFL.

“I really enjoyed my previous time within the TAC Cup at the Western Jets.

“It is another one of the attractions of coming back to the TAC Cup competition that you get to work with the up and coming stars.

“I have the opportunity to go back and to talk to people about what it is like in the AFL and to be able to answer some of those questions and help guide a few of these young players so when their name gets called out on draft day, they are as prepared as they can be.”

Neeld will commence his new role on February 3.