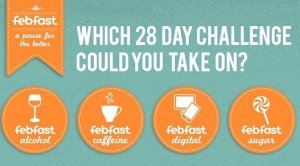 FebFast is here and ready to help you with your pre-season.

Former TAC Cup players Luke Ball, Ivan Maric and David Mundy are just a few of the AFL names who have signed on to support the FebFast Pre-Season Challenge, encouraging football teams to take part in FebFast 2014 as part of pre-season training.

FebFast is extending its 28 day alcohol-free challenge this year to include the choice for participants to take a break from sugar, caffeine or digital overload (time spent in the evening with the TV, social media, computer and tablet) for the month of February, to raise money for young people struggling with drug and alcohol addiction. A portion of funds raised via FebFast will go to the AFL Players’ charity, Ladder, to support its valuable work with homeless and vulnerable youth.

The AFL Players’ Association and AFL Victoria are encouraging individuals to register for FebFast and fundraise as part of their pre-season preparation. Community clubs will also be able to register as a team and the clubs that raise the most amount of money during February will go in the draw to win one-off AFL memorabilia that can be used for club fundraising efforts throughout the year.

Launched in 2007, FebFast has raised more than $5.5 million to support 40 programs from all corners of Australia and inspired 1,000,000 drink free days. Luke Ball, President of the AFL Players’ Association, said the players were eager to lend their support to FebFast.

“With footy season around the corner, we are encouraging local players to join the FebFast Pre-Season Challenge and not only reap the benefits of a healthy month, but also help FebFast raise awareness of the damage drugs and alcohol can have in our community," said Ball.

"As a playing group we are proud to support FebFast, who will again be providing a percentage of all funds raised to the Players' charity Ladder, who continue to tackle youth homelessness and provide young people who are at risk of homelessness with the support and skills they need to return to independent living.

Ball said the challenge provided local footballers with not only the ability to raise money for a great cause but also a final chance to get in shape prior to the season ahead.

“It's 28 days, four weeks, and we've split it into four quarters so it will be a bit of fun whilst raising awareness and funds for a number of great causes."

Community clubs and associated netball teams can register now for the FebFast Pre-Season challenge by visiting FebFast.org.au. Teams can also access pre-season fitness tips and a full list of participating players at febfast.org.au.

Over six years, FebFast has raised more than $5.6 million for solutions to youth addiction and inspired nearly 1,000,000 alcohol-free days. Almost all (97 per cent) of FebFasters reported at least one lifestyle benefit from taking a break from alcohol, including:

28 days wihtout including low alcohol drinks, with the exception of lemon, lime and bitters.

28 days without high sugar foods. Use labels as a guide: anything with over 5.0g of sugar per 100g is a no-go. Simple substitutes can be made, including replacing low fat with full fat dairy products and replacing soft drink with mineral water. A guide on what to avoid and substitute items will be provided to registered users.

28 days without caffeine: including coffee, tea, caffeinated soft drinks and energy drinks. As a guide, if a product contains more than 40mg of caffeine, it’s a no-go. A guide on what to avoid and substitute items will be provided to registered users.

Every evening in February from 8pm onwards: no TV, DVD’s, laptop, tablet, smartphone (except if it rings!), gaming or e-Readers.

One family member registers their family as a team. Each member nominates a ‘Fast’ to take on and the family fundraises together.