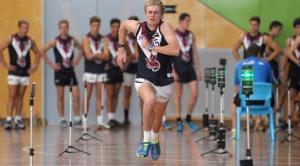 Over 550 players from AFL Victoria’s TAC Cup competition ‘Class of 2014’ assembled at Maribyrnong Secondary College last Saturday for a day of mental and physical testing.

Records were broken at the College’s world class facility, with players breaking the 3 second mark in the sprints consistently, numerous 16+ scores in the beep test and sub 8 second agility results.

AFL Victoria High performance Manager Leon Harris said it was great for the players record their preseason results across a number of tests.

“The current crop of 2014 players produced outstanding results, and no doubt over the next 6 months, they will back up these results with football talent.”

Apart from the physical testing, education was at the forefront with Respect and Responsibility, Racial Vilification and Anti- Doping all dealt with in great detail.

AFL Recruiters turned out in record numbers, and the AFL Talent brigade (Kevin Sheehan, Michael Ablett, James Veale, Chris and Brad Johnson) were there in force.

AFL Victoria would like to thank the following people that helped make the day a great success:

Results are currently being compiled, and will be sent to clubs early next week.

Click HERE for a photo gallery of the day.

Click HERE for a clip of some of the tests on the day.