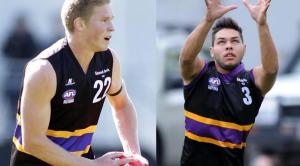 The Murray Bushrangers will be right behind Port Adelaide this weekend in the AFL, with two former players set to make their AFL debut.

2012 TAC Cup Team of the Year member and Port Adelaide draftee Tom Clurey will make his AFL debut after 12 months in the system, along with 2013 Power recruit Jarman Impey, who was a Vic Country representative last year and part of AFL Victoria’s inaugural Laguntas program.

The chance of a trio of Bushrangers debuting was scuttled with Carlton today naming Nick Holman – who was in the mix to play against his former teammates - as an emergency for Sunday’s game against Port Adelaide at Etihad Stadium.

The news of the double debut has a number of the Bushranger faithful, including their coach Darren Ogier, continuing down the Calder Hwy this Sunday from Bendigo - where they will be playing the Pioneers in a practice match - to witness the proud moment for the club.

“It is an outstanding achievement for these players, and the pleasing thing is they are good mates, so to debut in the same game will mean so much to them, sharing the moment,” Ogier said.

“I have known these guys since they were 14 or 15, so it is exciting to have seen their football journey from year one to now.”

Despite not making his debut with his former Murray teammates, Ogier believes Holman will not be far away, and has already achieved so much just making an AFL list at the end of last year.

There will be 31 Murray Bushranger draftees in the AFL this season, 10 of those at interstate clubs. The Power pair will face 2001 Bushranger draftee Jarrad Waite who will line up for his 169th game for Carlton.