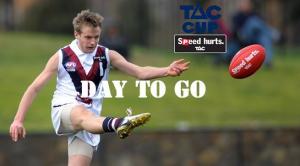 Each season gives a new wave of players an opportunity to seize the moment and forge their own piece of history in AFL Victoria’s TAC Cup competition.

Last year it was the Eastern Ranges that rose from the bottom of the ladder in 2012 to the premiership in 2013 – such is the transient nature of the competition.

Which region will make a similar rise this year, or will it be one of the regular finals contenders that can take the next step in 2014?

The coaching staff of each of the 12 regions have made the tough decisions in the preseason to cut their lists for their final 2014 squads, and we congratulate all players named this year on a list.

In the lead up to Metro Round this weekend, we spoke to the coaches to find out their thoughts on season 2014, revealing some of the players to watch this season as well.

AJ: We are aiming to get the balance between offense and defense right. We preached the defense side, but we want to be a bit more attacking in our rebound.

AJ: Jake Lever has unfortunately done a knee but will likely still be in most people’s considerations come the end of year. Peter Wright, Matt Goodyear, Touk Miller and Ben Allen has just been added to the Vic Metro squad. We also have a couple coming back from injury that hopefully will attract some attention as the season moves on.

DB: We are hoping theysecond year players can be role models to the next crop of players coming through. We will have four or five players that played in the premiership as regular players this year. Any experience (they had) of playing in finals is a great experience, and hopefully that will hold them in good stead for this year.

DB: Christian Petracca will be one, he is very strong forward type who will go through the midfield this year. Daniel Nielsen is a key defender we think will develop. Luke Hannon and Matt Traynor are two midfielders we hope will develop throughout the year. There will be four or five players that give themselves a chance during the year.

AS: We are a lot more even across the playing group this year so what I look forward to is watching our players demand attention by their actions on the field over the next few weeks and get invited to the Metro Squad. I want to see our top age players build reputations in this competition and I want to see our bottom age players begin to force their way into our team as some have already done. None of this will be gifted to anyone, it will come about with hard work and dedication and a deep belief in themselves and a confidence that I want to see in the way they practice and play.

AS: Garret McDonagh is a beautiful distributor of the footy by foot. Zac Ballard is a hard inside mid field, tackling machine. Aerialist Kyle Langford roams through the high forward area. Good finisher. Jason Castagna is a speedster with dazzling lateral movement. Reece McKenzie is back after a year off, plays deep forward and is capable of marking everything. Liam Hunt, 19 year old back after injury interrupted 2013. Jordan Perry also a 19 year old back after injury interrupted 2013. Sam Switkowski is a courageous midfielder and Josh Iacobaccio is the club captain.

JW: We are looking at a more even effort throughout the course of the entire year as we were probably a bit inconsistent with our performances last year. We are really keen to have a strong performance in the first round, as the first round last year did not go to plan. Our boys are training really well, and we are really up and about for the first four rounds, and we believe we are well prepared and our guys will compete really strongly.

JW: Darcy Moore, who has just been named captain. He was nominated by the players and the committee. He will play key back and captain the club this year. We have a couple of 19 year olds, with one that has come back after limited TAC Cup experience by the name of Jack Sinclair who has only played a couple games of TAC Cup and he has had a really strong preseason. He is a midfielder that gets plenty of the ball and has the ability to go forward. Matthew Jackson is a 189cm midfielder and has a really nice kick on him and good around the clearances.

What can we expect from Sandringham in 2014?:

JP: I would like to hope from an external point of view people would see a close knit, very coachable group of players that really enjoy their footy. These are some of the characteristics that externally I hope people see. We have a good group that really enjoy their footy, so we hope week to week that they are able to play their roles and play the brand of football that will help their individual development and something they can enjoy as a program as well.

JP: Ed Vickers-Willis is a half forward, running type of midfielder. Angus Brayshaw our captain is a very classy midfielder, a workman like type. Brayden Maynard a forward/back, is a really competitive type of player. Sean McLaren is a ruckman, key position player who is really athletic. Tom Wilkinson is a hard running wingman half back that has a lot of intensity around the footy.

What can we expect from Western in 2014?

TB: We want to make sure that we play a very competitive brand of football, and if that turns into more wins than losses that will be fantastic and we hope that some of our players get some great opportunities at a national level.

TB: We have two boys in the AIS / AFL Academy system, with Liam Dugan and Duom Dawam, and both of those players will get opportunities at higher level this year. I also think that Jay Laverde has had a great preseason, and he is in the Vic Metro squad, Corey Ellis is another player that has had a fantastic bottom age year, and we are looking for him to show big things this year.