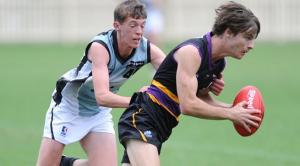 Last week previewed all the metro regions, this week we spoke to the country coaches to find out their thoughts on season 2014, revealing some of the players to watch this season as well.

DN: We had North Ballarat and Murray both in a practice match, and we play them in the opening games of the season so it will be a country feel to the start of the year. It will be a great way to start the season being up in the region, starting in Shepparton (vs Murray), so not too much travel just yet and to stay near home will be a great start to the year.

CB: Hopefully we can play a nice exciting brand of football, and give the kids a bit of freedom to express themselves the way they want to play. A real team orientated brand of football as well, so hopefully that is what we will see year for the Stingrays.

CB: We have a couple of the AIS kids in Tom Lamb and Daniel Capiron, and would expect them to be good for us. This year we have a couple of kids that have not been in our program before, in Geurts, Bennett and Dale that all played senior football in the local competitions in grand finals last year. They have come in not being involved in our program before so it will be interesting to see how they go.

AA: We see it as a season of opportunity for all the boys because we have a lot of AIS, a few Vic Country players and the squad has 13 APS players. It is a great opportunity for a lot of boys to play TAC Cup this year, and we are really excited about playing some good Falcons footy.

AA: We have the AIS boys obviously with Nelson, Goddard and McCartin. The guys we hope will have a really good year are Joe Maishman, Nick Dixon, Scott Dixon, Teia Miles and Aaron Christensen have had great preseasons.

LB: I think we will be a little bit younger than normal. We will have a lot of bottom age boys but I see us being really competitive and the way we have performed over the preseason, we have improved each week and we think that will be the case as we move forward. It has been a little bit of a disrupted preseason due to the fire across the road, but I see us improving week by week, particularly early in the year.

LB: Jordan Cunico is one, he is a Traralgon boy and he will play midfield and also has the ability to play half back or forward. He is super quick, has elite skills and uses the ball well. Lukas Webb is another, we will only have him probably for the first couple of games then he goes to school footy. He is a strong midfielder but can also go half back and forward and is a smart player who reads it really well.

DO: We are taller than what we have been for the last few years. We have around 30% more talls than what we have had in the last three years and there are some athletic guys involved in that group as well so if we can kick it to them hopefully they can mark it.

DO: We have Nick Couglan and Caleb Marchbank both played only two games each last year due to injury and both got injured in round 2 so they have not played since then. Nick is with the AIS and Caleb is training with Vic Country and are both 190cm plus guys who are athletic and talented off both feet and read the game well. Nick Mellington has also been very impressive as well.

What can we expect from North Ballarat in 2014?:

DL: Hopefully a competitive group of boys that have a clear goal of improving themselves as individual players and certainly working within a team ethos. It is always a test for the guys to how they will respond to going up and down the ladder so to speak. We have changed a lot of the list, so it is another fresh bunch of kids in and they certain have great attitudes.

DL: Keegan Mason, Dan Butler, Oscar McDonald, Josh Webster are a few of our top age boys. We also have some exciting bottom age boys coming through as well. We have got a good spread across the group and hopefully will get some reasonable results.