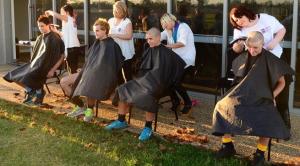 The Bendigo Pioneers have a secret weapon against opposition clubs in season 2014.

The tactic however is for a good cause, with the club for the second year running supporting the Leukaemia Foundation’s World’s Greatest Shave.

In mid-March every member of the 2014 Bendigo Pioneers squad shaved their head for charity, which is sure to make the matchups difficult for opposition coaches in 2014.

Bendigo Pioneers coach David Newett said it was great to see the players support such a worthy cause.

“The whole team committed to the fundraising process, and after raising over $20,000 last year, the guys all got behind World’s Greatest Shave again this year.

“It is for a great cause and we threw our support behind it as a team to try and raise as much as we can.”

Newett said it was pleasing that his side showed a commitment to a cause outside of football.

“The guys are doing some really good work, and they don’t want praise for it, but they are aware that a lot of families are affected by cancer on a daily basis, and they have an awareness of that.

“We really stress to our guys that there is a lot more than football in life, and it is great that we can offer this sort of support to those that may have been affected in the region.”

“Last year they only set a target of $2,000 and we blew that out of the water really quickly with three or four families raising over $3,000 each in their region.

“We did not set a target this year, but we aimed to throw our support behind it and hoped to raise a few thousand dollars to contribute.”

If you would like to contribute, head to www.worldsgreatestshave.com and search Pioneers in the team section.

Click HERE to view a photo gallery of the shave.