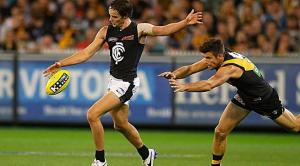 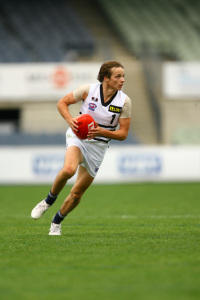 Playing off the half-backline for Carlton in only his second game in three seasons on the list, Dylan showed plenty of dash finishing with 18 possessions and six tackles in the Blues’ narrow loss to Richmond in Round One at the MCG.

Dylan’s match was highlighted by his clean use of the ball. His opponents included Shane Edwards, Jake King and Ricky Petterd.

It was the 21-year-old’s year first AFL match on the MCG as a senior player and only his second AFL match.  He debuted for the Blues in Round 3 2013 against Geelong.

Carlton coach Mick Malthouse said he was delighted with Dylan’s transition to a defensive player.

"To have a young player like that who has transformed himself from a forward to a back is just fantastic," Malthouse said.

"I went to him last year and said that we would consider the move, so he needed to start to get his head around a different type of training – and he has risen to the challenge.

"He's a kid who gets down here early, loves the football club and loves training. What we all like about Dylan is it doesn't matter who the opposition is or how big they are, he will always have a crack."

“A feature of Dylan's football at young age, was his explosive pace and his ability to break lines with his 'run & carry' during games.

“Dylan had a positive personality, was always 'upbeat' around his teammate and he was an enthusiastic team member during his time at the Northern Knights; well respected by his peers.”

Dylan represented Vic Metro in the 2010 NAB AFL Under-18 Championships and is a graduate of the AFL National Academies. He played junior football with the Fitzroy Junior Football Club and the Northern Knights.