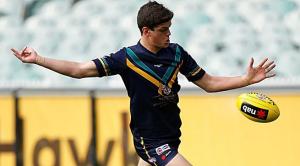 A trip to the UK and Europe during the early stages of the TAC Cup season would not seem like the ideal preparation for any player in the year they hope to be drafted to the AFL.

This, however, is no ordinary trip.

For 13 players from AFL Victoria’s TAC Cup competition, the opportunity to travel overseas with the AIS/AFL Academy is a once in a lifetime chance totrain, play and recover away from the comforts of home.

The AIS-AFL Academy level two squad, consisting of players who are heading into their draft year, departed for a 14-day European tour last Saturday. The squad arrived in London, basing themselves in Wembley, before travelling to the AIS European training centre in Varese, Italy the following weekend.

Prior to jetting off overseas, the squad played Collingwood’s VFL side at the MCG on the Friday night. Collingwood's side featured a number of experienced players, with the likes of Quentin Lynch, Ben Kennedy and Kyle Martin taking to the field and helping the Magpies to a 14.20 (104) to 5.1 (31) victory.

AFL Victoria High Performance Manager Leon Harris said the whole experience for the Victorian Academy members will be one they never forget.

“What a way to start their experience with the AIS/AFL Academy with a game at the MCG, the home of footy,” Harris said.

“Players will remember that occasion for the rest of their lives.

“Last year both Thomas Boyd and Darcy Gardiner starred in this game and helped confirm their AFL selections later in year from their performances.”

The squad will then depart London for Varese on Sunday April 13 for a training camp at the AIS European training centre.

AIS-AFL Academy High Performance Coach Brad Johnson said that the AIS-AFL Academy was looking forward to taking the squad to Europe to gain invaluable experience, especially after their match at the MCG to start the journey.

“We aim to give our players unique experiences to develop as their strive to make it on AFL lists and the opportunity to play at the MCG in the lead up to the Grand Final replay was another important stepping stone,” he said.

“It is a great challenge for the players to prepare and recover from matches in a new environment whilst also representing their country and the game,” he said.

The following AIS/AFL Academy members from the TAC Cup made the trip to Europe: