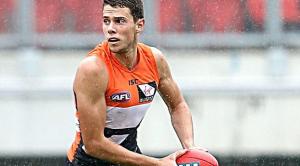 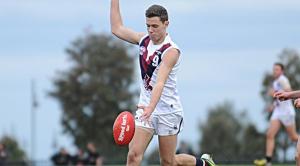 Playing in just his second AFL match, Josh showed class and composure in difficult conditions in the Giants’ 32-point win over Melbourne at Spotless Stadium on last Sunday. He kicked two goals in the final quarter and finished with 17 possessions.

The 19-year-old played in the midfield and showed a willingness to tackle and contest against his experienced opponents.

“Josh had a great pre-season and we were really happy with his debut in Round Two, but he stepped up again this week against Melbourne,” Cameron said.

“He’s a very talent young player but as good as his couple of goals were, his contested possessions and his willingness to tackle has really stood out to the coaches and the playing group."

Sandringham Dragons Talent manager Ryan O’Connor said it was great to see Josh playing in the AFL, and being recognised for his performance on the weekend.

“He is a great example to our players, of what you can achieve when you focus hard on your training and preparation.

“Noone can question his workrate or professionalism, and he always seems to make the difficult look easy,” O’Connor said.

“Despite not having as much physical size, he still gets a lot of the inside ball, and his goals in the wet at the end of the game on the weekend highlight his ability.”

Josh was selection two in the 2013 NAB AFL Draft. He was recruited from the Sandringham Dragons, with his junior club being the East Brighton Vampires Junior Football Club, where he started at NAB AFL Auskick.

He represented Vic Metro in the 2012 and 2013 NAB AFL Under-18 Championships and was named an Under-18 All-Australian in 2013.  He excelled at the 2013 NAB AFL Draft Combine recording the best time the three-kilometre time trial.

Josh is a graduate of the AFL National Academies and was a joint winner of the 2013 Ben Mitchell Medal. He is the son of former North Melbourne midfielder Phil Kelly who joined the Kangaroos after winning two Sandover Medals and a WAFL premiership for East Perth.

Josh is the second former TAC Cup player to receive a nomination, following on from former Northern Knight Dylan Buckley in Round 2.