Crouch the next Rising Star nominee 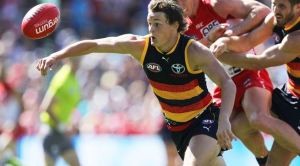 The midfielder, who turned 19 on Monday, was one of the team’s best in the 65-point win over the GWS Giants last Sunday.

Matt’s match tally of 28 possessions could have been more had he not been subbed out of the game at three-quarter time.

“Matt has a real hunger to learn more about the game and his role in the team,” Sanderson said.

“He is also a fierce competitor, who makes great decisions under immense pressure.”

North Ballarat Rebels Talent Manager Phil Partington said it was a great reward for Matt so early in his AFL career.

“It is outstanding news for Matt; we as a program always thought Matt would make an impact when he would play AFL football.

“His first few games have been exceptional, and it is great to see him receive a Rising Star nomination so early in the season.”

His coach at the Rebels in 2013, David Loader said despite those outside the Rebels’ program questioning Matt’s running ability, the positives far outweighed this minor area of his game.

“Our push to all the recruiting staff and people watching the game was that you don’t have to be the best runner in the world when the ball is in your hands at every stoppage.

“He had a phenomenal ability to read the football, and be where the ball was at all times,” Loader said.

“His year with us last year was nothing short of outstanding, despite only playing seven or eight games due to injury, he only missed the Morrish Medal by four votes.

“His ability to win the contested football in close was always going to hold him in great stead when he went to the next level.”

Matt was the Crows’ first selection, (selection 23 overall) in the 2013 NAB AFL Draft.

He played two games for Vic Country in the 2013 NAB AFL Under 18 Championship before breaking his hand, but he finished the TAC Cup season in great form averaging 37 disposals (16 contested), seven clearances and five tackles for North Ballarat Rebels.

Matt was originally recruited from Beaufort is also a graduate of the AFL National Academies. Matt’s brother and Crows teammate Brad was a rising star nominee in Round 14 last year.

The son of former North Melbourne player Donald McDonald, Luke was selected by the Kangaroos as a father-son pick in the 2013 NAB AFL Draft, after playing with Werribee in the Peter Jackson VFL that season.

During his time with Oakleigh Chargers, it was Luke’s competitiveness that really stood out to Talent Manager Mark Smart.

“Luke did his utmost every single time he stepped out on to the field,” Smart said.