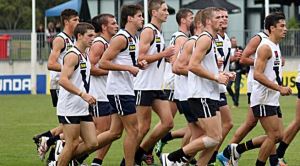 While the Easter long weekend saw a break in the TAC Cup schedule, it was a big weekend for the AFL Victoria under 18 state academy squads.

Both the Victoria Metro and Country academies were in action with players vying for selection for this year’s NAB AFL U18 Championship teams.

Visy Park hosted the Easter feast of talent, with Vic Country playing trial matches against the Northern Territory and NSW/ACT under 18 teams on Good Friday, and Vic Metro playing an intra-club match on Easter Sunday.

In the first match, Northern Territory got off to a great start. But as the Vic Country team made up of Bendigo Pioneers, Murray Bushrangers and North Ballarat Rebels players got used to their new team mates and worked together they began to dominate.

The constant rain and slippery conditions didn’t slow down Vic Country’s goal scoring as they pushed on to record a comprehensive victory.

The rain cleared and the sun shone through for the second match, with NSW/ACT setting the tempo early and showing plenty of class.

Again it took some time for the Vic Country team, made up of Geelong Falcons, Gippsland Power and Dandenong Stingray players, to get going.

After the halftime break, a much better team effort from Vic Country saw them chip away at the seven goal deficit and set up a thrilling last quarter.

A strong and determined NSW/ACT team held on, winning by two points.

For the interstate teams, who will be playing additional games in the TAC Cup this year, it was a great test being able to pit themselves against some of the best players in the competition.

For Vic Country coach Mark Ellis it was an opportunity to see how his players faired under pressure from quality opposition and how they fitted in to a new team dynamic.

“We had about 48 to 50 boys coming in that have all been in good form in their TAC Cup games, the good part about today is seeing how they go playing at the next level.

“You watch them play in their TAC Cup games and it’s exciting to watch them play. Here we get to see what they can do at a different level and how they gel together quickly as a team.” Ellis said.

Usual team mates found themselves in the strange position of matching up against each other in the Vic Metro intra-club match. But as the players crossed the white line, friendships were quickly put aside and a tough contest ensued.

Metro coach David Flood challenged his players, running them through a number of different positions and seeing how they reacted under pressure.

It was a solid hit out, with plenty of skill on display. In a fast flowing game, there was only a few goals difference between the two teams all day.

While the players were all vying for individual selection, the emphasis for both Country and Metro coaches was on team work and seeing who was prepared to put the team first.

The coaches now face the unenviable task of making selection decisions as they look to finalise their teams for the NAB AFL U18 Championships that commence in May.