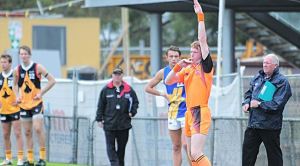 As we enter Community Umpiring Round this weekend, it is time to meet the new man that is heading AFL Victoria’s State League umpiring department in 2014.

Cameron Nash, a former VFL umpire himself, has taken over this year from Kevin Mitchell, with Mitchell retiring from the role after 24 years.

Nash joins AFL Victoria from AFL Queensland, where he spent the last two years involved with helping develop their AFL and State League umpires. Prior to his move north, he spent three years at the Eastern Football League in the role of Director of Umpiring.

His experience at all levels of umpire is something that Nash believes will hold him in good stead for the new State League Umpiring Head Coach role.

“Having been not too long out of the system, I still have a fair understanding of what is involved at this level.

“Having coached at community level and State level in Queensland is crucial to this role.”

The new role is something that Nash has quietly always aspired to.

“To be honest, it has been a bit of a long term goal.

“Having umpired for nine years, once I finished umpiring I got into coaching, and it was always in the back of my mind that if and when this job became available it would certainly be something I would be keen on going for.”

In the role now for just over three months, it was a world wind start to the position, getting to know and meet all the umpires and the support staff. With over 130 umpires over field, boundary and goal, it is a large group to manage across the VFL, Development League and TAC Cup.

Not only is there the umpire group to manage, but also around 60 support staff to assist the umpiring department. It all helps ensure the development of the umpires at this level.

“We coach the guys and girls to umpire at the highest level here, with the hope like last year that a number of them progress to the AFL.

“At least half of the current AFL list is umpires from Victoria, and that is something that I want to make sure we continue to do - to be the leader in helping producing the next group of AFL umpires.

“Looking at the current list and where we are going, things are looking pretty good.”

Nash retained the majority of the coaching panel from 2013, but added a number of experienced umpires to help develop the group further this year.

“We kept the majority of the panel from last year, and added some new coaches to help introduce some new faces, with the focus on people not long out of the game at either VFL or AFL level

“Damian Anderson, who is a former VFL and NEAFL umpire, is now assisting us, and some AFL boundary and goal umpires will observe some games.

“Stefan Grun, a former VFL and AFL umpire, is also on board as a match day field umpire coach.”

Community Umpiring Round will be recognised this weekend in the Peter Jackson VFL and TAC Cup by the coaches shaking hands with the umpires out on the ground prior to each game.

While the pregame meeting of umpires and coaches is not something new, Nash believes making this gesture out on the ground recognises this pregame ritual to the general public.

“It obviously happens each week inside the rooms, which the public do not get to see when the umpires visit the rooms prematch.

“By doing it this particular week on the ground, it certainly highlights what happens on a weekly basis, but out on the ground for the public to witness and appreciate.”

Nash believes the Community Umpiring Round helps recognise the role of umpires on a weekly basis at all levels of the game, and also helps highlight the umpire pathway.

“It is one of many aspects this round highlights, is the job that umpires do at all levels, and recognising the pathway that is there for umpires.

“Umpires can progress to State League football if they are dedicated and committed to their umpiring.

“I think the number of Victorian umpires in the AFL is testament to this.”