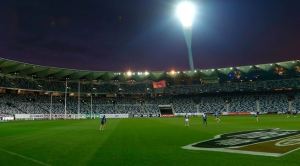 Being able to step on to the playing surface at Simmonds Stadium in Geelong is an inspiring experience in itself.

Home to the Geelong Football Club, it’s a ground often referred to as one of the best playing surfaces in the AFL.

So many champion AFL footballers have graced its hallowed turf, so many classic matches and displays of brilliance have prevailed at the ground.

This Friday night Geelong Falcons and Calder Cannons players will partake in an experience of a lifetime, playing the first TAC Cup match at Simonds Stadium under lights.

A joint effort by AFL Victoria, Simonds Stadium Management, Geelong Football Club, City of Greater Geelong and the TAC Cup clubs has enabled the match to be scheduled.

Both clubs have started the season in outstanding form, and it promises to be a great display of TAC Cup football on the big stage.