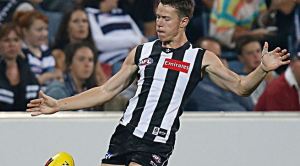 Langdon, selected by Collingwood at pick 65 in the 2013 NAB AFL Draft, was best on ground in the Magpies’ 34-point win against Carlton last Friday night.

Fielded in his now familiar role across half back, Langdon demonstrated poise and composure belying his years, routinely foiling the Blues with his innate ability to regularly intercept.

Collecting 23 disposals, including 10 contested possessions, and eight marks, Langdon once again demonstrated his penchant for the big stage, which began with his AFL debut in Round One.

Langdon played junior football with the Glen Iris Gladiators before joining the Sandringham Dragons. He represented Vic Metro in the 2012 NAB AFL Under-18 Championships.

After being overlooked in the 2012 Draft, Langdon returned to the Dragons as a 19 year old and played three senior VFL games with the Sandringham Zebras as the 23rd man before become a regular VFL selection playing six games for the season. He attended the 2013 NAB AFL Draft Combine where he tested well.

The former Dragon featured in all three pre-season games for Collingwood in February, with the ease of his transition to the elite level helping mount an irrepressible case for selection in the opening match of the season.

Langdon’s subsequent performances have proven sufficient reward for Collingwood’s show of faith, ranking eighth overall in the competition for intercept marks, and twelfth for rebound 50s.

“Tom was originally passed over in the 2012 draft giving him resilience, a drive and a desire to embrace his opportunity and take it with both hands. Having played only seven games, he still has a long way to go in his football journey, but what we have seen so far has been very encouraging,” he said.

Sandringham Dragons Talent Manger Ryan O’Connor knew the potential was always there with Langdon and is very pleased to see him achieving at the highest level.

“It is a win for the system and the 19 year old rule in the TAC Cup, but it is also a credit to Tom and his family, that he stayed on course and believed in himself and worked through to where he is now.

“It is a credit to him what he has been able to do in the AFL system. We always thought there would be some upside to him with some extra training, and I think he has embraced the full time AFL regime, playing an exciting brand of football and it is great to see one of our kids out there like that.”