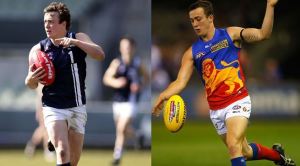 The 19-year-old has played nine AFL games for the Brisbane Lions Football Club after making his debut in Round One. Lewis finished with 20 possessions against the Kangaroos last Saturday at Etihad Stadium. He has delivered consistent performances with highlights including two goals against St Kilda and 19 possessions against Essendon and the Geelong Cats.

AFL Victoria’s Geelong Falcons Talent Manager Mick Turner believes a number of AFL clubs will ask the question why they did not select Taylor earlier, with the former Falcon picked at selection 28 in the 2013 NAB AFL Draft.

“In my mind I always thought he was a top 10 draft pick,” Turner said.

“I was surprised he went out to pick 28 last year in the draft, but that has happened before as Allen Christensen, who is now a premiership player at Geelong, went at pick 40.

“I rate him (Taylor) as one of the best players that has been through the program, and I think barring injury he will prove that.”

Turner believes his size – at just 173cm – may have had an impact on him sliding down the draft selections last year, but his ability has always been unquestioned.

“I think sometimes the taller players are selected before the smaller ones.

“Size does not matter, you are always drafted on ability and I think some clubs will look back and think ‘who did we select before pick 28?’”

Lewis has spent most of his time playing as a small forward for the Lions and rotating in the midfield. His opponents have included last week’s rising star nominee Jarman Impey and Sydney premiership player Nick Malceski.

He captained Vic Country in the 2013 NAB AFL Under-18 Championships and named in the 2013 Under-18 All-Australian team. He was a member of the 2012 AIS-AFL Academy – Level Two squad.

“You can always count on Lewy to have a red-hot crack. He’s a self-motivator and his enthusiasm is infectious," Leppitsch said.

"To be able to slot straight into senior footy in his first season on an AFL list a testament to the hard-work and effort Lewy has put in since arriving at the club.

“He has put together some consistent performances over the last couple of weeks and it is exciting for our fans to be able to follow the development of Lewy over the next few years.”

Geelong Falcons coach Andrew Allthorpe believed his workrate has been what has always set him apart.

“His effort during his time in the TAC Cup program was fantastic; especially his level of resilience and commitment to improve in his football is unquestioned.

“To see him achieve a Rising Star nomination so early in the season is no surprise to us, and we are wrapped he is loving his football at Brisbane, and working hard to improve again at the next level.”

Lewis was recruited from the Terang-Mortlake Football Club in country Victoria before his time in the TAC Cup with the Geelong Falcons. He is the seventh former TAC Cup player to be nominated in season 2014.