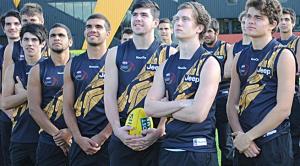 The 2014 Laguntas Program kicks off this weekend at Punt Road Oval, looking to build on the momentum gained in last year’s highly successful first edition.

The philosophy behind the Laguntas Program was, and remains, a simple one.

Laguntas is designed to fill a void in the talent pathway for indigenous footballers (aged 16-19) and help them reach their potential in a tailored development program.

Supported by the AFL, the Korin Gomandji Institute (KGI) and AFL SportsReady, the 2014 Laguntas Program will see more than 40 boys attend three separate weekend camps to develop as off-field leaders, learn about their cultural heritage and to be mentored by respected role models on how to find success on and off the field.

They will have the opportunity to don the Laguntas jumper in practice games against other academies/talent programs in the broader AFL Victoria talent pathway, including the Vic Country U16 Squad this Sunday at 2:30pm at Punt Road Oval.

Former Brisbane Lions premiership hero Chris Johnson will again play a key role as head coach, while current AFL stars Neville Jetta (Melbourne) and Dustin Martin (Richmond) will act as mentors as part of their work with the KGI.

AFL Victoria Indigenous Programs Manager Aaron Clark said the Program would hopefully act as a stepping stone for graduates of the U15 Kickstart Program for U15 indigenous footballers to the TAC Cup system.

“More than 70 per cent of the kids who have been invited to this year’s first Laguntas Camp were members of our Kickstart Program over the past two years,” Clark said.

“We’re also inviting talented 18-year-olds who for whatever reason haven’t had the opportunity to get the most out of their football in the past.”

Clark said development opportunity for these boys went far beyond the football field.

“The feedback we got from 2013 AFL draftees Jay Kennedy-Harris (Melbourne) and Jarman Impey (Port Adelaide) is that that having that peer support was significant in their journey to the AFL.

“Something that all these boys bring up, and it was no different for Jay and Jarman, was the social isolation they felt growing up as a young indigenous men.”

“The social challenges these boys face, the often challenging family situations and the racism they encounter are unique to indigenous Australians and having that peer network through our programs is significant.”

Clark said another key component of Laguntas was providing good mentors and role models, such as Johnson, who participants can learn from.

“Our programs have a strong leadership focus and we hope that guys like Kennedy-Harris who captained the Oakleigh Chargers in 2013 and Aaron Christensen who is Geelong Falcons captain this year have benefited from that development.”

Indigenous players already participating within a regional TAC Cup program will also have the opportunity to participate in the related off field development program associated with Laguntas over the 2014 season.