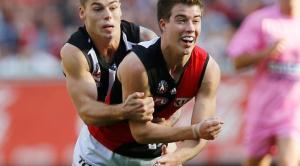 The small midfielder/forward from Essendon FC booted two goals in his best game for the Bombers against Richmond in the Dreamtime at the G match last Saturday night.

Zach, 18, debuted in Round One and has played seven AFL games. He has found some good form over the past month kicking two goals against the Brisbane Lions and racking up 19 possessions against the Sydney Swans.

“Zach is a terrific young man who comes from a great family. His brother Jackson is also at the club and they are two very competitive individuals. If Zach continues to work hard, if he trains and plays with the same enthusiasm and hunger, then he could have a very successful career at Essendon.”

Zach was Essendon’s first selection in the 2013 NAB AFL Draft (section 26 overall). Hailing from Cobden in regional Victoria, he was a talented cricketer and made his senior football debut for the Cobden Football Club aged just 16.

He relocated to Melbourne after receiving a scholarship from Melbourne Grammar and played with the Sandringham Dragons in the TAC Cup last year. He averaged 18.4 disposals playing every game for Vic Country in the 2013 NAB AFL Under-18 Championships.

Zach also proved he has great awareness at the 2013 NAB AFL Draft Combine when he topped the decision-making test.

Zach is the first Essendon player to be nominated since Jake Carlisle in Round Nine 2012.